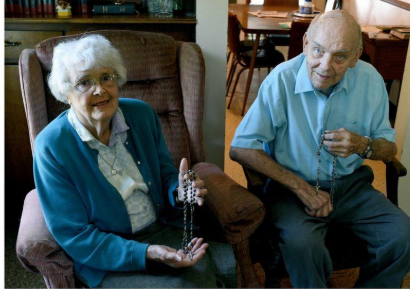 Ruth and Gerry Masserant use the seeds of Job’s Tears to make the beads, their rosaries have been distributed ‘all over the world.’

As a student at St. Mary Academy, Ruth Masserant was introduced to the rosary in 1951.

A priest told the story of Our Lady of Fatima in Portugal, which touched on religious apparitions three young children experienced in 1917.

“The talk greatly influenced me,” Ruth said. “I started praying the rosary often.”

So moved by the experience, she decided that when she one day married, she and her spouse would recite the prayer every night.

In 1953, when she married her husband, Gerry, she sought out to make her decision a reality. For the last 65 years, the couple from Frenchtown Township have done just that.

But their devotion to the rosary extends beyond the act of prayer. For several years, Ruth and Gerry have harvested Job’s Tears they grow on their land to make rosary beads.

The plant produces seeds that are shaped like tears. The seeds were used to make some of the first rosaries and are named after Job, a man whose story is told in the Bible. He endured great loss but retained his faith.

What is a rosary?

The Catholic Holy Rosary is a string of beads, each representing a prayer to be prayed silently or as a group.

The rosary is arranged in sets of five groups of prayers, called decades. Each decade begins with the Lord’s Prayer (“Our Father”), followed by 10 Hail Marys and ending in a prayer known as the Glory Be. Each decade is centered in what are known as the Mysteries of the Rosary, which recall significant events in the lives of Jesus and Mary, drawn from either Scripture or the tradition of the Catholic Church. Five decades are reflected upon per rosary.

The rosary beads are used by an individual to help say the prayers in the proper sequence.

A standard 15 Mysteries of the Rosary, based on a long-standing custom, was established by Pope Pius V during the 16th century, grouping the mysteries in three sets: the Joyful Mysteries, the Sorrowful Mysteries and the Glorious Mysteries. In 2002, Pope John Paul II added a fourth set of Mysteries, termed the Luminous Mysteries, bringing the total number of mysteries to 20.

The Glorious mysteries are said on Sundays and Wednesdays, the Joyful on Mondays and Saturdays, the Sorrowful on Tuesdays and Fridays and the Luminous on Thursdays. Usually five decades are recited in a session.

“Every year, Job’s Tears have been included in our garden among the corn, tomatoes and all the vegetables,” Gerry said.

The two have been making rosaries since 1975 when they received Job’s Tears seeds from Angie Magolan of Wyandotte.

Magolan carted around an Our Lady of Fatima Statue that would visit houses for a week at a time. Whenever she visited a house, Magolan would pray the rosary and always gave two rosaries constructed from the seeds.