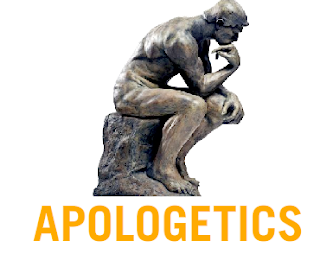 NEW TERM ? : Apologetics (from Greek ????????, “speaking in defense”) is the discipline of defending a position (usually religious) through the systematic use of reason. Early Christian writers (c. 120-220) who defended their faith against critics and recommended their faith to outsiders were called apologists.

A new book from www.Apologetics.com apologists connects typical discussions of doctrine and intellectual apprehension with an atypical focus on behavior and belief. Belief includes action: “a willingness to act as if something were so.” (Dallas Willard)

This ethical focus may not be uncommon — with likely no shortage of books telling us how to live — but for a kind of book that often deals exclusively with what we think about God … it’s new.

“Apologetics is fun again!” jokes staff apologist Paul Hughes, who edited the book. “We have fun on the radio show and that comes out in the book.”

The book’s 15 chapters — the first eight on think and the last seven on live — are based on the radio shows. Apologetics.com broadcasts its weekly radio show on KKLA-FM 99.5 on Fridays at Midnight. KKLA is the largest Christian station in the L.A. Market; the group’s podcasts are also available on their website, and on iTunes.

“Being on at Midnight, we’re primetime for listeners in India and the Philippines!” Hughes said.
“It’s also a great time here to reach who the book speaks to: the young, with an edge to their belief perhaps. Non-Christians, too.”

“Apologetics.com has become an important part of Christian thought, philosophy, and apologetics in Southern California,” says Craig Hazen, founder and director of the Christian Apologetics program at Biola U., in La Mirada, California. Hazen wrote the introduction for the book.

Hughes: “The disconnect between how we think and live is artificial. We’re showing how they really belong together.”

Think and Live is @Amazon.com, hard copy & Kindle; Barnes and Noble; and www.Apologetics.com. Video: www.youtube.com/watch?v=UtnVOBF8sK8. For updates, info, blogs, and all that: www.ThinkAndLiveBook.com.