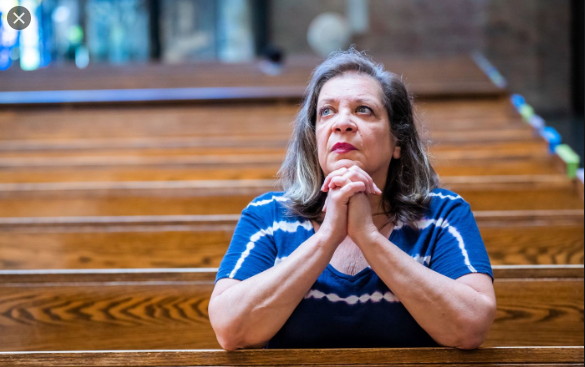 Thanks to an army of prayer warriors, holy water and a tenacious will to get better, Polly Kenzie knows the Lord saved her life. And her faith.

DETROIT — If you ask Polly Kenzie to tell you her story, she wants you to know, first and foremost, that it’s full of what she calls “God winks.”

While eating dinner one night in April 2018, something in her food cut the inside of her throat, sending her to the emergency room. Kenzie couldn’t stop bleeding and was confused when the medical team decided to do an MRI.

Within 40 minutes, the doctor came back to inform Kenzie that she had stage 4 kidney cancer. Kenzie had not presented with any symptoms despite the fact that a tumor had completely grown around her kidney.

Through the terror and devastation, Kenzie says this is where the first “God wink” appeared: the bleeding stopped, and it never came back. It had nothing to do with the cancer, but had it not happened, Kenzie would never have been diagnosed.

As she lay in the hospital, reeling from the news, a doctor walked by her room, and seeing her crying, stopped to comfort her.

“He sat down and he held my hand and he talked to me for 45 minutes, which is so unusual,” Kenzie said. “He just chatted with me and tried to calm me down. I felt as if God was with him and me.”

The next day, a second “God wink” came her way. Kenzie’s brother called from Ohio and recommended a world-renowned surgeon who had recently treated a friend with kidney cancer. He happened to be from Detroit, but that wasn’t the most providential part.

He also happened to be the same doctor who had sat with Kenzie and comforted her as she cried the day before.

Determined to fight the cancer, Kenzie met with a kidney cancer specialist who bluntly told her that with no cure for the disease and because of her advanced age, she would die within five years.

“I didn’t like that,” Kenzie said. “I told her, ‘No, you’re wrong. I am not going to die from this. I will die from something else, but it would not be from this.’”