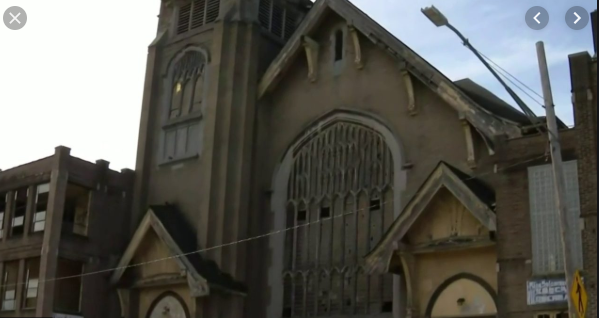 King Solomon Baptist Church in Detroit, a nationally-prominent historic site in the Civil Rights movement of the 1950s and 1960s, is getting a new breath of life.

The Michigan State Historic Preservation Office has been awarded a $500,000 African American Civil Rights grant from the National Park Service, the Michigan Economic Development Corporation announced today. The funding will be used to rehabilitate the roof of the historic church.

The grant will fund the roof work with the goal of protecting the building to stop further weather damage while a plan for its reuse is developed. Funded work will also include construction drawings, insulation, shingles, drain slopes and drains, metal edging, copper valleys and saddles, and repair and replacement of fascia trim.

“Our goal in this restoration is to continue the church’s tradition of empowerment, education and research,” Rev. Charles Williams II, pastor of King Solomon Baptist Church said. “The black church from its inception has had a mission to deal with oppression and disparities in black communities. The way we intend to appreciate the past is by carrying that torch forward.”

King Solomon Baptist Church, located at 6125 14th Street in Detroit, was built in 1917 for a white Baptist congregation. As the Northwest Goldberg neighborhood evolved from white to black after World War II, it was purchased in 1955 by an African American congregation led by historian and writer Rev. Thomas Boone. The church complex also includes a 5,000-seat auditorium, one of the few places of its size that African Americans could utilize in Detroit in the mid-20th century.

The church became a significant site in the Civil Rights movement as a popular speaking venue for nationally-recognized leaders. In 1954 Thurgood Marshall, then lead council for the NAACP, spoke at the church immediately following their victory in the Brown V. Board of Education ruling, which overturned segregated schooling. In 1956 U.S. Rep. Charles Diggs gave a national radio address about the murder of Emmett Till.

Dr. Martin Luther King Jr. spoke twice at King Solomon. The church is best known as the site where Malcolm X gave his revolutionary “Message to the Grassroots” speech in 1963 that changed the course of the civil rights movement and led to the establishment of the Black Power Movement.

The church was also significant in the Black Arts Movement housing an African American cultural center known as Boone House (demolished) that fostered black artists, musicians, writers, and poets including Langston Hughes and Dudley Randall at a time when they were barred from other Detroit venues due to de facto segregation.