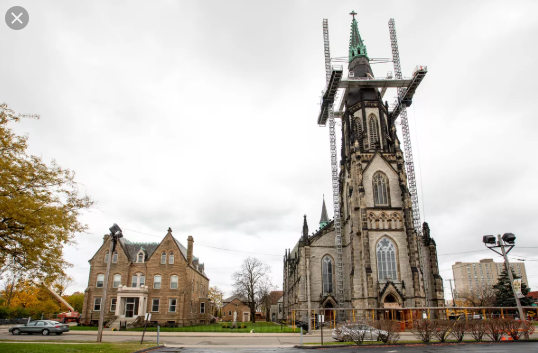 A new chapter is about to begin for an old Detroit church.

According to the Catholic church, the bell tower was constructed in 1873, which made it the tallest building in Detroit at the time. The steeple was added in 1892.

For the restoration, the church replaced the wood underlayment, then added real slate and copper with a patina treatment. The work was done by Detroit Cornice and Slate.

We wrote about the church and its restoration efforts last year. Before the restoration campaign, signs pointed to the church closing. Membership was decreasing and a bevy of repairs were necessary.

In early 2016, a wind storm severely damaged the historic steeple, and its slate cladding was removed for safety. The parish was divided between two other churches, and St. Joseph received the fewest visitors. It looked dire for the church.

Things have turned around since. The campaign has been successful in not only raising money, but renewing interest in the church. Around 600 people regularly attend Sunday services and the Detroit News reports that St. Joseph has raised $1.2 million of the necessary restoration funds.

Future work will include redoing the electrical and HVAC (will help preserve the historic details), repainting the shimmering ceiling, and upgrading the landscaping and fencing. It also plans to add a sound system.