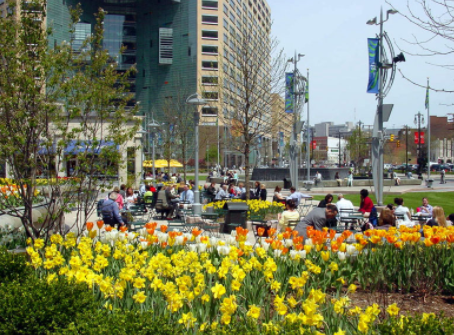 City crews are underway with an ambitious beautification program to plant 1,000,000 daffodils across the city by the fall of 2020.  Evidence of this effort went on display in spectacular fashion this week as 265,000 bulbs planted over the past few years began to bloom along medians and near parks. Brad Dick, who runs the city’s General Services Department, said that the planting effort, which will place another 209,500 bulbs this year, is just one of the many ways his department and others are working every day to beautify the city.“City crews have done a lot of the basic things to remove the unattractive things Detroiters have had to deal with for years, like graffiti, illegal dumping and blighted buildings,”

Dick said.  “Now we are transitioning to programs that actually beautifies our city, whether it’s improving our parks, planting 10,000 new trees or something as simple as planting flowers.  It all adds up to a more beautiful and attractive city for everyone.”Dick said the program had its genesis in fall of 2014 with a small staff of four employees who planted 16,000 bulbs at Palmer Park, and has gradually grown into a major citywide initiative.  In 2015, another 34,000 bulbs were planted in Rouge Park, Belle Isle, Balduck, Boyer, and Pingree Park.  In 2016, 21 parks and medians were included in the beautification plan with the idea to “paint spring throughout the City.” Some of the species of flowers often used to create the painting effect are the ‘Dutch Master’ Daffodil, ‘Mt. Hood’ Daffodil, Blue Scilla, and Tulip ‘Teletubby’ Orange, to name a few.