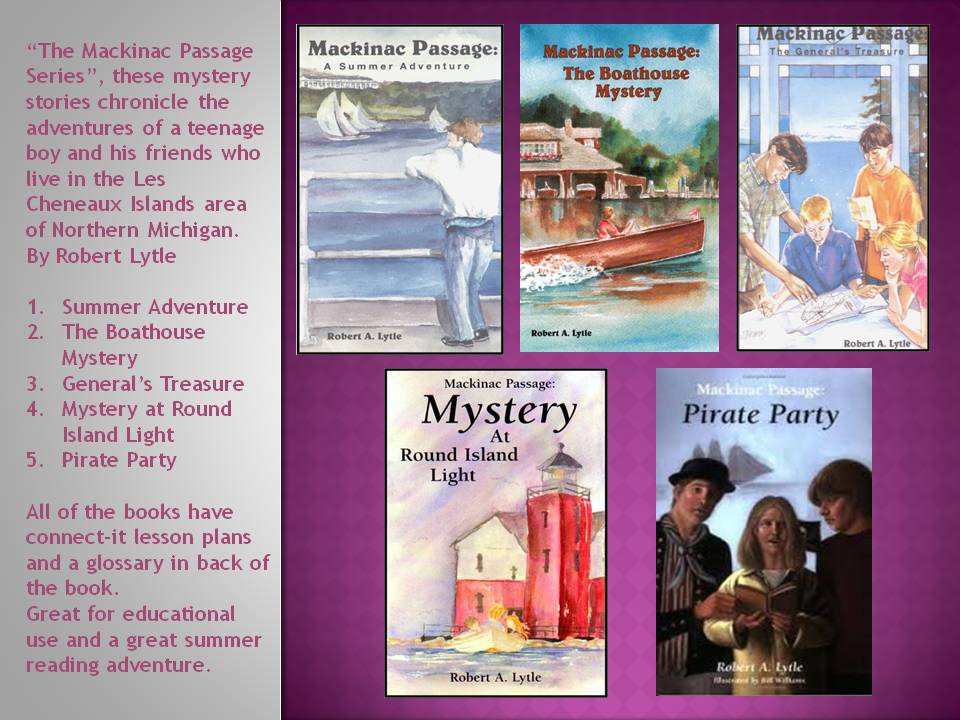 Mackinac Passage: A Summer Adventure Thunder Bay Press Available at Amazon or in many Michigan gift shops and book stores.

With summer approaching, the Mackinac Passage series of five young adult novels are perfect for boys and girls of all ages. His legion of avid readers range from third grade to seasoned citizens.
Growing up in the Les Cheneaux Islands of Michigan’s eastern upper peninsula, Robert Lytle has combined the wholesome activities of his youth and added a few fictitious characters and a totally believable plot to weave a terrific story. Set it in a place known by most Michiganders Mackinac Island and its surrounding resort areas have been a summer destination for over 150 years.

First of the series. Fourteen-year-old Pete Jenkins meets three summer resort friends—the four primary characters throughout the Series. Their carefree activities such as sailing, fishing, and socializing are interwoven with the discovery that someone is passing fake $20 bills throughout the Northern Michigan area. Pete and his friends trace the unlikely culprit to an old man—a local summer resident who lives as a hermit on a nearby island. They suspect that he is in league with another man, a Mackinac Island dock master who is taking the counterfeit money to Mackinac Island. There they pass the fake bills off at a bike rental. Pete and friends follow these first two villains to Mackinac Island where they witness the murder of a third accomplice who is sent to his death over a cliff. The murderers discover they have been followed and set out to eliminate the witnesses. Pete and his friends make their escape in the darkness of night in their sailboat, hoping to reach the safety of their Les Cheneaux Islands’ home before the bad guys can catch them in their speedboat. The next morning the counterfeiters discover the friends have escaped and make chase, leading to a remarkable conclusion.

Highlights:
Fishing scene where Pete catches a musky. Three resort kids watch.
Softball game in which Pete is introduced to the three friends.
Pete sails for his first time with his new friends and leans where the term “boom” is derived.
Staking out “Mystery Island” where the old man is making the counterfeit money.
Sailing to Mackinac, following the two counterfeiters.
Watching the demise of a third member of the ring.
Hiding out and then making a midnight sail back to the Snows.

Mackinac Passage: A Boathouse Mystery
Second of series. The chase scene, which ended the first story, results in the injury, but not death, of the two criminals. The two bad guys make their new hideout in an abandoned boathouse, and from that location, steal from the boathouses of Pete’s friends and other summer resorters.
A party at Pete’s boathouse results in the discovery of the two criminals.
As with the first book, there is much social activity on the surface, such as water skiing and a charity basketball game to benefit a local polio victim. The proceeds of the basketball game are stolen by the two villains. Pete and his friends go after the criminals and eventually catch them. High drama with the chase scene and midnight capture of the villains in another boathouse.
Other dramatic scenes:
Kids realize burglaries of many area boathouses maybe related to previous story’s villains, who were supposedly drowned.
Basketball game in which a new resorter is jealous of Pete and freezes him out of the game.
Kids visit an old French trapper who they suspect is the culprit of the boathouse burglaries. He sends them away with a blast of his old shotgun. It’s not him.
Kids learn of a renegade Indian who they then suspect and follow for a time—but it’s not him, either.
Kids finally discover an abandoned boathouse with clues leading to their old nemesis’s (the Mackinac Dock master and the old writer, who were thought to have been killed at the end of book I)
They find another unused boathouse and investigate that. There, the kids are captured by the really bad guy (the Dock master), but Pete and his new friend, his former basketball rival, join to rescue the others and capture the villain.

Mackinac Passage: The General’s Treasure
Third in the series. As a reward for the four friends’ heroics in the second story, they are invited to stay at Mackinac Island and the home of one of their relatives. A storm at Mackinac Harbor brings Pete into contact with an elderly lady yachtsman, who nearly loses her boat in the storm, were it not for Pete’s heroics. She invites Pete and his friends to her summer home as dinner guests. It turns out that she is the heir to a vast fortune—the whereabouts of which is concealed in a poem left by her eccentric uncle, a former Civil War general. The plot sends the four friends all over Mackinac Island on a treasure hunt. They are followed secretly by another person who knows of the treasure but not of its location.

Dramatic scenes:
Storm at Mackinac Harbor, boats tossed and Pete helps elderly woman.
Woman, daughter of late Civil War general, invites friends to dinner. Here they meet the woman’s deranged nephew.
Woman gives Pete an old poem. Her mentally-challenged nephew becomes belligerent.
Pete’s friends discover that the poem is, in fact, a treasure map.
Kids find an old book with map that names places in the poem.
Woman’s nephew, at the instruction of another treasure seeker, follow kids to steal poem.
Poem’s clues lead kids (and bad guys) all over Mackinac Island and finally to the treasure on nearby Goose Island.
The bad guy waits for the kids to find the treasure, then takes it and tie the kids up to die. All except for Pete who has managed to evade the bad guy. He stumbles upon them, and with the help of the deranged nephew, who has managed to survive the really bad guy’s malice, overtakes the villain.

Mackinac Passage: Mystery at Round Island Light
Fourth in the series. Pete and his three friends, while visiting the wealthy uncle’s posh summer home, board a dinghy and cross the quarter-mile passage from Mackinac Island to the mysterious but decommissioned Round Island lighthouse. They are chased off and told in a message not to return. The warning serves only to rouse the interest of Pete’s three friends. Back on Mackinac Island, the friends learn that burglaries have been occurring all over Mackinac Island. Since no local policeman are currently in service, th three friends decide to take on the role of crime stoppers. The sleuths investigate and a golf game at the top of the Island leads them to one of the burglars. They discover an elaborate plan, which includes robberies, fencing the stolen goods , and sending the goods by way of freighters to distant locations. The kids go to Round Island once more and become trapped in a fire set by one of the burglars. The Ghost of Round Island Light (the former lighthouse keeper) saves Pete from sure death. He helps Pete puts out the fire, saving the old lighthouse and his friends.

Dramatic scenes:
The initial visit to Round Island.
The dreams of Pete’s twin friends, which foretell danger.
The golf game, which leads to the discovery of the burglar’s hideout.
The fire set by the burglar to eliminate Pete and his friends.
The approach of the ghost and his saving of his lighthouse.

Mackinac Passage: Pirate Party
Fifth (and last) in the series. At the annual summer year-end extravaganza every under-21-year-old member of the Les Cheneaux resort community dons pirate gear and goes to an uninhabited island for a party put on by Mr. Heuck, a friendly old Captain Hook-esque resorter. On their way to the party Pete and his friends see an ancient, three-masted schooner in the distance. They take their boat closer and are soon abducted by the old ship’s captain. Pete and his friends soon discover that they have gone back in time to the year of 1812. The ship, the British merchant craft Caledonia, is carrying British soldiers and American Indians as they make their advance on Mackinac Island where, the next morning, they will attack Fort Mackinac to begin the War of 1812. Although Pete and friends are unable to thwart the takeover they are instrumental in promoting a bloodless incident, an almost unheard of result in the history of such encounters.
Dramatic scenes:
Pete meeting Captain Hook, the puckish resorter and party planner.
Pete and his friends abduction aboard the British ship.
Kids meet native American twins and help with attack procedures.
The enactment of the British attack on Fort Mackinac.
The truce instigated by Pete’s friends
Pete and his friends’ return from Mackinac to the Les Cheneaux Islands and the discovery they had somehow returned to the present without any time lost at the Pirate Party.