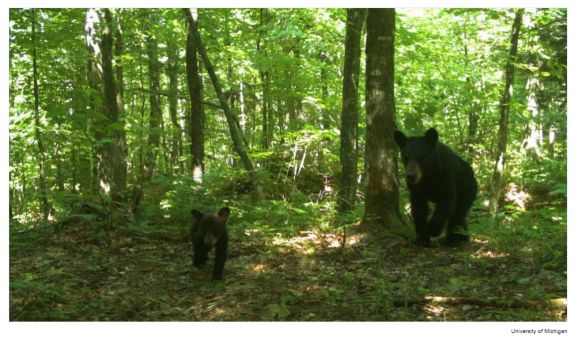 A raccoon slowly and deliberately pads by on the way back to its den. A tom turkey’s wattle jiggles as he pecks at the ground for grubs and other tasty morsels. A while later, an inquisitive black bear ambles into frame and stops. Something is different in her world, she notices. She sniffs at the camouflaged box strapped to the trunk of the old growth sugar maple tree. She nudges it with her snout.Unbeknownst to our bear and other assorted woodland creatures, this incognito box isn’t some piece of detritus left behind by errant outdoorsmen. Rather, it is a high-tech motion-triggered camera dispatched in service of an unprecedented study of biodiversity being undertaken by researchers at the University of Michigan.“What we are studying is carnivore community ecology and the carnivores of Michigan in particular,” says Dr. Nyeema Harris, principal investigator on the study, “species like black bear, bobcat, coyote, lots of different weasels, grey fox, red fox, skunks and raccoons.”