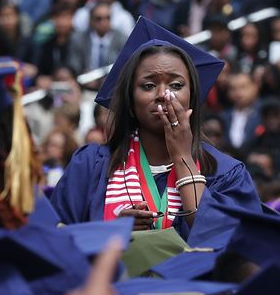 At Howard University’s commencement speech on Saturday, Ciearra Jefferson listened while the keynote speaker, President Barack Obama, urged seniors like her to keep advocating for change.

Then Obama did something Jefferson didn’t expect: he mentioned her by name, and told the audience about her story growing up on Detroit’s west side.

“People like Ciearra are why I remain optimistic about America,” Obama told the audience. “Young people like you are why I never give in to despair.”

“When he called my name I just dropped to the floor,” Jefferson said. “I literally fell out of my chair. I was listening so intently that I began to cry. And I began to reflect on what I’ve been through and how far I’ve come.”

Jefferson’s path to Howard was far from easy. While she was growing up, her mother worked 12-hour shifts at an auto plant, seven days a week, to support her and her younger sister. The family moved homes often because of financial trouble.

To read more of this story, visit http://www.freep.com/story/news/local/michigan/detroit/2016/05/09/president-barack-obama-ciearra-jefferson-detroit-senior-howard-university-graduation/84161632/