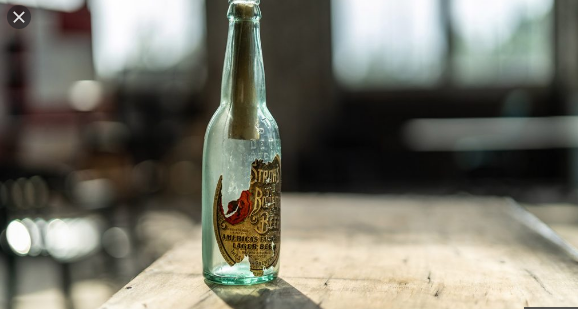 Two members of the crew helping to turn Detroit’s century-old Michigan Central Station into a modern innovation hub came across an old Stroh’s bottle with a message inside hidden behind a cornice high on a wall.

The bottle is stamped with the date 7-19-1913, which coincides with the original construction of the building that had been abandoned in 1988.

Written on the rolled-up paper inside appears to be the message “Dan Hogan and Leo Smith stuck this greeting of Chicago July 1913.”

“I think the bottle was left there with the hope that someone finds it in the future,” project superintended Dave Kampo told Ford.

The original Stroh’s brewery was located across the city from the Corktown-area station in east Detroit and closed in 1985. It was demolished the following year.

The bottle is one of more than 200 artifacts that have been found at the site, but the only one with a message.