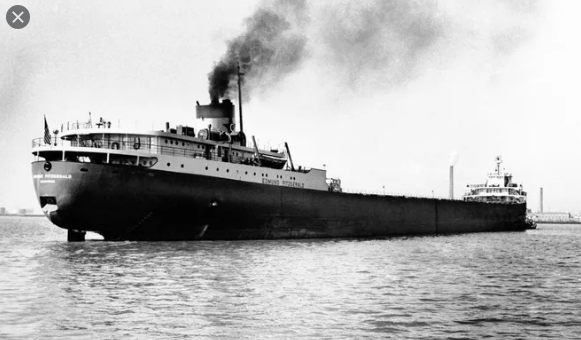 The 29 men who died when the Edmund Fitzgerald sank 45 years ago are being memorialized this week throughout the Midwest in events from Detroit to Whitefish Point to Two Harbors, Minnesota.

The Rev. Jeffrey M. Hubbard, rector of the Mariners’ Church of Detroit, said so many Michiganders still remember the Fitz — out of thousands of Great Lakes shipwrecks — because the story is part of our collective consciousness.

“It’s stuck in the memories of folks in Michigan, and the Great Lakes are so integrally connected to our area,” Hubbard said. “Hearing the story of the brave men who lost their lives resonates with people.”

The tragedy, he said, is embedded in our history from the initial reports of the massive freighter battling high winds and waves on Nov. 10, 1975, and because of the beautiful, but haunting, Gordon Lightfoot song released a year later.

“The legend lives on from the Chippewa on down / Of the big lake they called Gitche Gumee,” Lightfoot sang. “The lake, it is said, never gives up her dead / When the skies of November turn gloomy.”

Sunday, the Mariners’ Church held its annual memorial service. The gathering, which started 45 years ago to remember the crew, was live-streamed this year for the first time on Facebook.

Two events are planned at the Dossin Great Lakes Museum on Belle Isle.

From 7 to 8:30 p.m. Tuesday, the museum plans to hold a lantern vigil at the Edmund Fitzgerald anchor followed by the live Honor Guard escort of a memorial wreath to the Detroit River.

Source: A church, museum and lighthouse remember the Edmund Fitzgerald