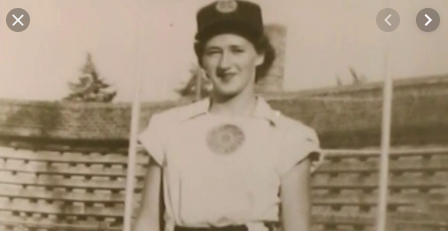 It has been 27 years since the movie “A League of Their Own” was released, a true story about the women of the All-American Girls Professional Baseball League in the 40s and 50s.

Geena Davis, Madonna and Rosie O’Donnell played the parts on the big screen. Local 4’s Jamie Edmonds sat down with a Michigan woman who doesn’t need Hollywood to tell her the story, because she lived it.

Mary Moore’s house in White Lake is like a mini baseball museum, with many artifacts, evidence of a professional baseball career. One that Moore still remembers like it was yesterday.

Moore grew up in Lincoln Park playing baseball on a field with boys. Even in high school there was no organized sports for girls.

“I was quite athletic,” Moore said. “Usually better than most of the boys, really.”

After she graduated early in January of 1950, an opportunity arose.

“My high school English teacher put me in touch with another lady who graduated and played in this league I never heard about,” she said.

That league was the All-American Girls Professional Baseball League. Chicago Cubs owner Philip Wrigley came up with the business idea in 1943, at the time the league was losing its biggest stars, as they were going off to war and attendance was dropping. The women were to hold down the fort while the men were gone and generate revenue.

By the time Moore tried out in South Bend, Indiana, in 1950, the war was over, but the AAGPBL was still thriving.

“They didn’t need a second baseman, they had one. They sent me to Chicago for a few more weeks of training, from there I was chosen to go on the Springfield Sallies,” Moore said.

The Springfield Sallies and the Chicago Colleens were not in the regular league, instead they were rookie training teams.

Each team had 15 players and they shared one Greyhound bus. They traveled the country playing against each other and promoting the league. They played 21 states and Canada in 3 months, 77 games out of 90 with some rained out.

That season Moore shined at second base, leading the team in games played, hits, RBI and  runs scored. She said one of the best parts was getting to play in places like Yankee Stadium and meet baseball legends.

Source: A league of her own: Metro Detroit woman recalls best days of…