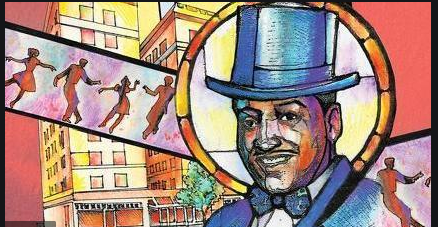 Back in the heyday of Detroit — from the Great Depression through the 1950s — Joseph “Ziggy” Johnson knew just about everybody who was worth knowing in the shops, bars, churches, theaters and nightclubs that lined the streets of that city’s celebrated Black neighborhood, called “Black Bottom.”

Johnson was a gossip columnist for the African American newspaper, the Michigan Chronicle; he also was a legendary nightclub emcee at two of the swankiest hotspots in town: The Flame and The Driftwood Lodge. And, he founded Ziggy Johnson’s School of Theatre to lift up the children of the city’s Black breadwinners — the workers, most of them men, on the assembly lines of Detroit’s automobile plants, which ran 24/7, seven days a week.

As Ziggy tells us in Alice Randall’s buoyant and innovative new novel, Black Bottom Saints: “[This] was the [economic] opportunity that created caramel Camelot.”

Ziggy Johnson is just one of the over 50 mostly real life African American artists, doctors, sports figures, activists and behind-the-scenes movers and shakers who populate this novel — many of whom I’ve never heard of and most of whom I now want to know more about. I can’t think of a more sparkling way to get some education about the history of Black Detroit beyond Motown than to read Randall’s novel.