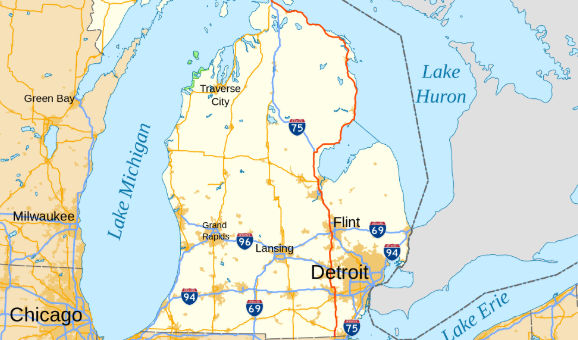 The history of human activity in Michigan, a U.S. state in the Midwest, began with settlement of the western Great Lakes region by Native Americans perhaps as early as 11,000 BCE.[1] The first European to explore Michigan, Étienne Brûlé, came in about 1620.[2] The area was part of Canada (New France) from 1668 to 1763. In 1701, the French officer Antoine de la Mothe Cadillac, along with fifty-one additional French-Canadians, founded a settlement called Fort Pontchartrain du Détroit, now the city of Detroit. When New France was defeated in the French and Indian War, it ceded the region to Britain in 1763. After the British defeat in the American Revolutionary War, the Treaty of Paris (1783) expanded the United States’ boundaries to include nearly all land east of the Mississippi River and south of Canada. Michigan was then part of the “Old Northwest”. From 1787 to 1800, it was part of the Northwest Territory. In 1800, the Indiana Territory was created, and most of the current state Michigan lay within it, with only the easternmost parts of the state remaining in the Northwest Territory.[3] In 1802, when Ohio was admitted to the Union, the whole of Michigan was attached to the Territory of Indiana, and so remained until 1805, when the Territory of Michigan was established.[4]

The opening of the Erie Canal in 1825 connected the Great Lakes with the Hudson River and New York City, and brought large numbers of people to Michigan and provided an inexpensive way to ship crops to market. In 1835 the people approved the Constitution of 1835, thereby forming a state government, although Congressional recognition was delayed pending resolution of a boundary dispute with Ohio known as the Toledo War. Congress awarded the “Toledo Strip” to Ohio. Michigan received the western part of the Upper Peninsula as a concession and formally entered the Union as a state on January 26, 1837.