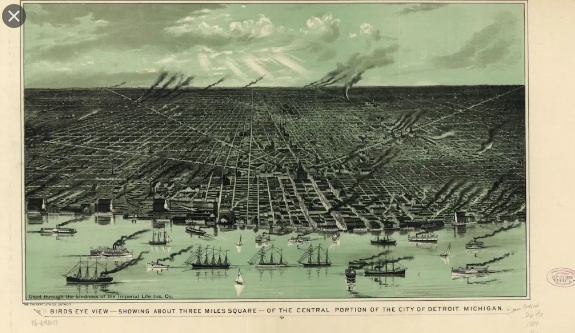 Detroit’s borders are infamously contentious. Grosse Pointe has erected barriers at various entry points to discourage traffic from Detroit. 8 Mile Road comes with its own baggage, a delineation between the city and suburbs that people have at times been discouraged or prevented from crossing.

But how did Detroit’s borders come to be the way they are? Were they always this contentious? And what can we learn from these decades-old border disputes?

These are the questions that a new series in Detroit Urbanism is trying to answer. Started by historian Paul Sewick in 2015, the blog looks at the history of Detroit’s “roads, borders and built environment.” Through old maps, newspaper clippings and photography, it has previously covered Native American trails in the city, Augustus Woodward’s master plan and the genesis of each radial road in exacting detail.

The latest series will cover the origin of each line on Detroit’s border, beginning on the east side, and include events like the acrimonious Grosse Pointe Park “border war” that lasted until the 1980s, the creation and annexation of St. Clair Heights and the saga of the Mack-Seven Mile Subdivision.

We spoke to Sewick about the Detroit borders series he began writing last month, how Detroit got so big, the legacy of annexation and why this all matters today.

Source: How Detroit’s borders were drawn — and why it matters | DETOUR