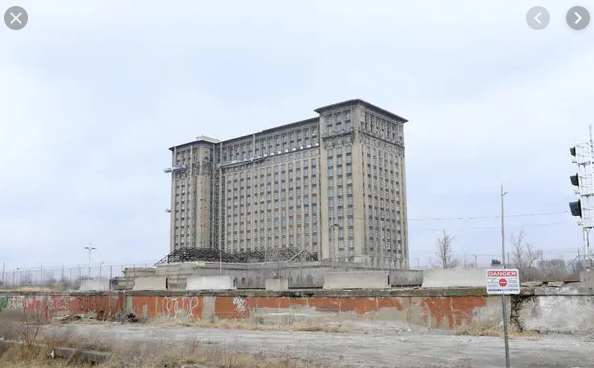 Detroit’s former main train station, designed in the Beaux-Arts style by the same architects who created Grand Central Terminal in New York, has tall columns and vaulted ceilings that hint at its past glory.

Yet much of the station is now crumbling, covered in rainbow graffiti and weathered by decades of rain and snow that seeped in through the deteriorating roof.

“Michigan Central Station has long been a symbol of Detroit’s vibrancy, and then it became an international symbol of decline,” said Detroit’s mayor, Mike Duggan.

Now the long-vacant station is getting a new life, thanks to the Ford Motor Company, which will transform the depot as well as an adjacent book depository, brass factory and hosiery factory into a 1.2 million-square-foot transportation innovation district.

The new development will house Ford’s autonomous vehicle division, among other units. The automaker also plans to lease space to companies working on mobility and transportation projects, such as smart vehicles, infrastructure and parking.

The innovation hub will also have shops, restaurants, art and performance spaces as well as a boutique hotel on the top floors of the 15-story tower rising above the station.

Ford’s transformation of Michigan Central Station is part of the bigger resurgence of Detroit, a story mirrored in cities, like Pittsburgh and Cleveland, that are trying to reinvent themselves to attract new jobs and residents. These Rust Belt cities, formerly known for their steel production, have struggled since the 1950s as jobs disappeared and residents left en masse.

Many of these turnarounds start in city cores, and transformation is indeed most evident in Detroit’s downtown, too. In early 2019, luxury retailer Shinola opened its first hotel there, a 129-room boutique resort that has the feel of a private London club with fireplaces and reading nooks.

The hotel’s walls have a palette of cream, camel and “Shinola blue,” a shade of navy blue that was derived from a fleck of paint found in a former Singer sewing machine factory, one of the five downtown buildings Shinola occupies.

Behind the hotel is a cobblestone alley lined with shops run by local female entrepreneurs, a beer hall and a Detroit-style fried chicken joint. This multiuse development was a joint project between Shinola and real estate firm Bedrock, founded by Detroit billionaire Dan Gilbert, whose firm has acquired and developed more than 100 properties in Detroit and Cleveland since 2011.

Across the street from the Shinola Hotel is another Bedrock project, a $1 billion skyscraper being built on the site of the former Hudson’s department store that will house a hotel, offices, shops and high-end residences when it opens in 2023.

The transformation of the train station has helped attract other investment throughout Detroit, Duggan said: “Ford has created momentum for other mega projects.”

In February, Fiat Chrysler announced a $4.5 billion investment in five Michigan plants, creating about 6,500 jobs in Michigan. Waymo, the self-driving technology company owned by Alphabet, the parent company of Google, opened its first factory in Detroit in late 2019.

Ford has a long history in Motor City, thanks to its Model T, the first affordable mass-produced automobile, which was made at the company’s Piquette Avenue Plant, built in 1904.

Train travel, however, was king in the early 1900s. Michigan Central Station opened in 1913, replacing a station that had burned down. In the station’s heyday in the 1940s, more than 4,000 passengers passed through each day.

Source: How Detroit’s revival is anchored in its long-vacant train station – Chicago Tribune