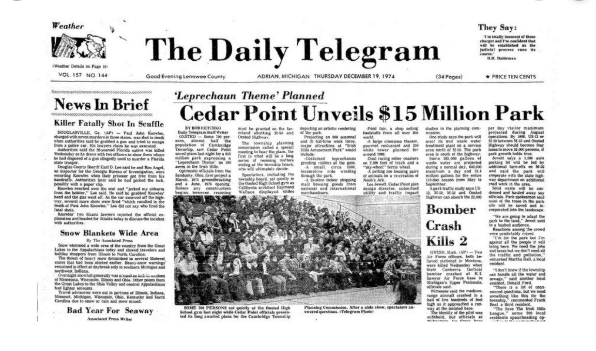 The vision for a Cedar Point-affiliated park as proposed in 1974 came to a halt in early 1975, about the time the shovels were projected to be turned.

In an alternate universe, north of Onsted, ground was broken in March 1975 after months of planning for a second Cedar Point amusement park. Approximately 160 acres of land would be developed in the coming months, with a grand opening in June 1976, just in time for the nation’s bicentennial.

The park would largely be located on what was known just a couple years before as Frontier City. The new 100-acre amusement resort would pave the way for economic development of the area between it, Michigan International Speedway, and the village of Onsted.

However, that vision as proposed in 1974 came to a halt in early 1975, about the time the shovels were projected to be turned.

Cedar Point bought approximately 440 acres of land in the area. The transaction and plans to build a new park were announced the last week of June 1974. The Onsted Village Council formally endorsed the park, seeing it as an economic boost for the small village. There was also incentive to endorse the park: the physical address of the park would carry the Onsted town name and ZIP code.

While many appeared to be excited about the prospect of an amusement park in their proverbial back yard, others were not in favor. Almost immediately, “Save the Irish Hills” — a league of residents against the development — formed. Citing concerns over nature, watershed, sewer, road and way-of-life impacts, the group voiced its disapproval over the proposed park.