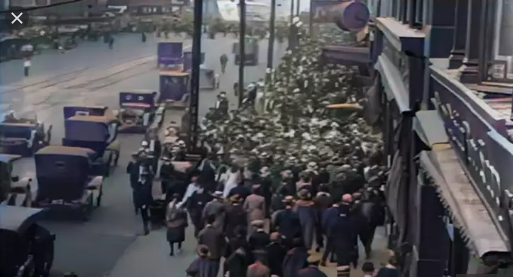 I’m really into the historical videos and photos and I just stumbled on the old footage of Detroit from 1921. Its been colorized (or at least someone attempted to) to give it a more realistic feel than the black and white film originally was but you can still tell just how old this video is. Crazy to see how well dressed everyone was! See if you can spot the old GM headquarters or the First National Building.

From YouTube “Detroit, Michigan (1921) Footage from the US National Archives. Titled “Dynamic Detroit” “Detroit began with a small French settlement on the west bank of the Detroit River early in the 18th century. This desirous site in 1763 passed into the hands of the English, during whose control Pontiac’s siege of 11 months took place. Americans took possession in 1783.” “What Cadillac saw in this location over two centuries ago has been heeded by thousands of followers and today Detroit stretches along 16.65 miles of river frontage.”

Source: Watch This Colorized Video Of Detroit in 1921 | Channel 955