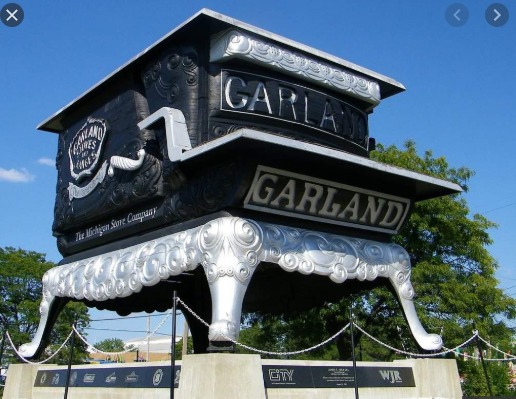 Do you remember the giant stove that sat on Woodward Avenue — and other areas of Detroit?

We received this question through our 4YI form this week, where you can ask us anything about Detroit or Michigan, and we’ll try our best to find answers for you.

The question was from Alex: “What has happened to the big stove the sat near the entrance to the State Fair grounds in Detroit?”

Well, Alex, to answer this question — we have to go way back to the 19th century, when Detroit was known for stoves — not cars.

It actually makes sense. The Upper Peninsula is a gold mine of iron ore, and as a result, Michigan became a national leader for iron-made products, like cast iron stoves, wheels for railroad cars, ships and marine engines during the nineteenth century.

“During the Victorian era, cast iron stoves replaced fireplaces that were dangerous and required huge amounts of firewood. First founded as the J. Dwyer & Company in 1861 by brothers Jeremiah and James Dwyer, the Detroit Stove Works was incorporated in 1864 with the financial backing of Charles DuCharme, a wealthy Detroit hardware dealer. The brothers were the first foundry owners in the region to combine modern engineering practices with foundry work.

Their company produced the “Jewel” stove, which by the 1890s was available in 800 different models.

Jeremiah Dwyer sold his share of Detroit Stove Works to his brother to take a year-long sabbatical for health reasons. He then formed a group of investors to found the Michigan Stove Company in 1871. The company expanded the variety of stoves available under the Garland label, including kitchen and cooking stoves, and a variety of heating stoves. Additional stove companies were started in Detroit in the 1870s and 1880s, and consequently, stove manufacturing became Detroit’s leading industry in the late 19th century.

The Detroit Stove Works bought out the Art Stove Company in 1923 and continued to make gas ranges for homes, and heavy-duty heating and cooking appliances for hotels, clubs, restaurants, and institutions, under the “Garland,” “Laurel,” “Jewel” and “Detroit Jewel” names.”

Source: What happened to the big stove next to entrance of State Fair in Detroit?