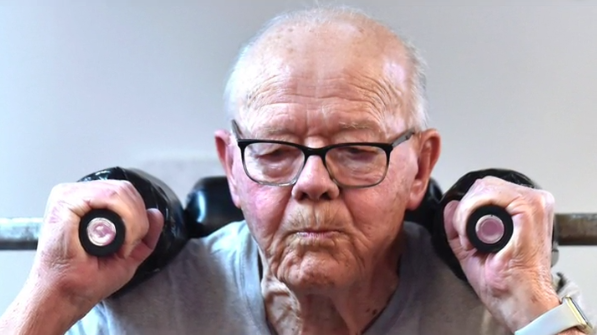 At first, when he was only 89 and didn’t know any better, John Claassen was hefting barbells for the wrong reasons.

Now he’s wiser and older — he turns 93 today — and he has come to realize it’s the work and the example that matter, not the size of the discs at the end of the bar.

The weights are still how you keep score. When Mike Kell of Birmingham, a mere 77, calls him an animal and says “he lifts 100 pounds more than me,” Claassen gently corrects him: “Only 90 pounds.”

The weights are enough to make him the subject of a short film, tied to his birthday and debuting to a closed audience Monday evening at the Emagine Novi theater. They’re enough to make him something of a celebrity at Greysteel Strength and Conditioning in Farmington Hills, which entitles him to get barked at as much as everyone else by a former emergency room doctor who thinks just maybe he’s saving more lives now.

The weights are, well, weighty. In his first official competition a few weeks ago, Claassen racked up a 235-pound deadlift. Since then, he has improved to 250, hoisting the bar to hip height and then lowering it to whence it came.

But weight, he has come to realize, is like age: a number, not a definition.

At one point, he read about a nonagenarian with a deadlift of 286 pounds. That was a goal for awhile, but no longer.

The value is in maximizing his abilities and “keeping my nose to the grindstone.” It’s in keeping his Monday and Friday dates at Greysteel, even though the most fun he has is when he climbs into his daughter’s car after another 90-minute session and rolls away.