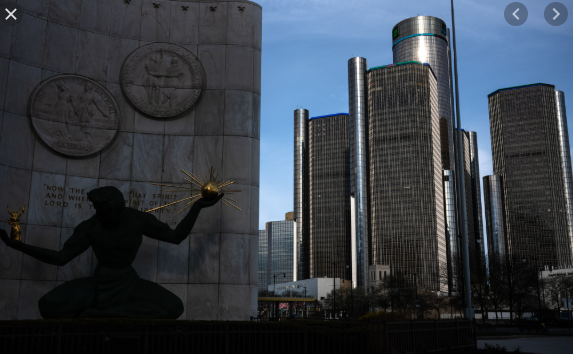 EACH TIME MY phone rings, my heart skips a beat. I’m afraid more bad news awaits me on the other end. I’m not sure when a ringing phone started to trigger panic. Sometime between the time I learned an aunt and uncle were both hospitalized, several weeks ago, and when I learned that complications from the virus had stolen the life of one of my cousins, a dapper gentleman who could make his 3-year-old granddaughter squeal with delight just by walking into the room.

They are three of too many people I know sick at home, hospitalized, or dead because of COVID-19. Detroit, home for most of my life, has been particularly hard hit—just when national media and newcomers had begun to see my city as the rough but precious gem I always knew it to be. It’s a city used to hard knocks, fighting back—and, as I see it, usually winning. An enormous replica of world champion boxer Joe Louis’s fist hangs above a main thoroughfare in the heart of downtown Detroit, a bronze monument to our fighting and winning spirit.

Detroit is the city that put America on the road. General Motors World Headquarters is just east of that Joe Louis fist. GM and other major auto companies, including Ford and FIAT Chrysler, have been the region’s lifeblood. The auto industry lifted many families like mine from poverty into the working-class, if not middle-class. (See where the number of COVID-19 cases are growing and declining.)

During World War II, this industry built vehicles, artillery, and more for the war effort, earning the title the “Arsenal of Democracy.” And now, as it did then, the auto industry has joined the fight against COVID-19, building much-needed ventilators and face masks.

One GM plant—in Warren, a city that borders Detroit—expects to produce up to 50,000 face masks per day. Wayne State University, a major research institution in the heart of the city, has partnered with Ford Motor Company to deploy specially-equipped Lincoln Navigator SUVs to provide mobile testing to first responders and health care workers.

Source: Detroit’s winning spirit helps it fight back against COVID-19