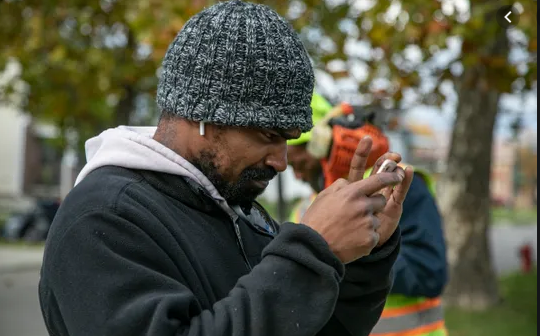 When Leonard Fantroy began going blind in prison in November 2014, he initially thought the sharp pain in his eyes was a migraine.

Then he stepped outside and saw what looked like a thick fog enveloping the prison yard — but other inmates couldn’t see it.

After a series of neurological tests, doctors confirmed what Fantroy feared, that he was losing his vision.

“I’m sitting there crying because I’m like, I got all these plans when I go home to take care of my family because I don’t want to go home and sell dope,” Fantroy recalled.

Transporting and selling drugs in Detroit had landed him in prison three times. Legally blind when he was released for the last time in 2016, Fantroy said he found a new determination to not return.

He started a landscaping company in 2018, rounding up a crew made up of his teenage sons and guys from his neighborhood on the city’s northeast side, some of whom also had criminal convictions. He dreamed up the idea after a month of sleeping on the floor because he couldn’t afford furniture for his rental home.

Fantroy, 41, manages the business with help from a small team of supporters. There’s a longtime friend who handles his paperwork and contributes her own money toward lawn mowers and landscaping tools. There’s a man he met in prison who’s seeking out entrepreneurship training for Fantroy.

Running a small business for the first time brings its challenges. Fantroy has wrestled with broken-down equipment and been targeted by thieves. He’s hasn’t been able to get a loan because of his credit score.

He pushes forward with urgency.

“My vision is fading. Every day I lose. So I have to be in a hurry,” he said.

Source: Losing his eyesight in prison pushed Detroit man to start own business