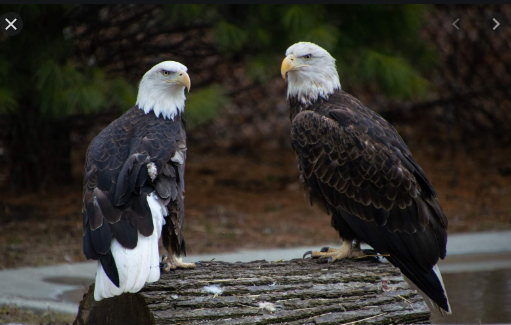 A bald eagle who was injured after a train collision last fall is now thriving at the Detroit Zoo.

In Oct. 2019, the bald eagle was discovered injured in a Wendy’s parking lot in Monroe, Michigan, after a citizen reported witnessing a train and bald eagle collide a week prior, according to the zoo.

Due to her severe wing injury, the female bald eagle, who is estimated to be around 4 years old, will never be able to fly again, and so she couldn’t be returned to the wild after receiving veterinary care for her injury.

“We’re happy that we’re able to offer her a home here at the Detroit Zoo,” said Scott Carter, chief life sciences officer for the Detroit Zoological Society (DZS). “We’re glad to report that she is settling in very well.”

Detroit Zoo visitors can identify the newcomer by her brighter beak and her head, which has more brown plumage compared to the others. Her head should turn completely white in the next year or two when she reaches adulthood. Adult bald eagles have white heads and tails with dark brown bodies and wings. The new female weighs just under 10 pounds, second only to Flash, who weighs just over 10 pounds. Mr. America, the smallest bird in the habitat, can often be seen perched next to Captain Marvel.

“Female bald eagles tend to display more assertive behaviors, so she could end up being in charge in the eagles’ habitat,” said Carter.