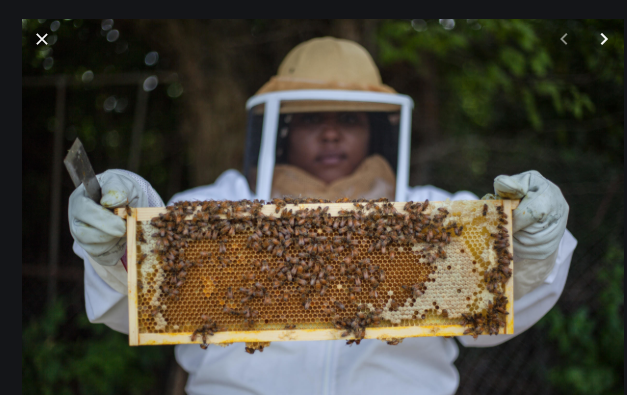 In the midst of a bad cold, he discovered “the power of raw honey” and became infatuated.

Jackson, formerly a self-employed entrepreneur in commercial photography and advertising, and his partner, Nicole Lindsey — both 35-year-old lifetime Detroiters — saw opportunity in Detroit’s tens of thousands of vacant lots.

“We were born and raised in Detroit … so we see (vacant lots) everywhere we go,” Jackson told EHN.

The couple made a pitch to a local micro-crowdfunding campaign, earning $1,600 that led to the purchase of a land plot and three beehives in 2017—and thus began Detroit Hives.

And they’re not alone—across Detroit, unused space is being used for urban gardening, farms and, increasingly, bees. As bees decline around the world, urban entrepreneurs like Jackson are trying to fill the void. Detroit Hives is one of the city’s two major beekeeping nonprofits, combining to operate nearly 200 hives in the metro area.

Data is sparse on urban keeping, however, The Honey Bee Conservancy, which has sanctuaries across the U.S. in large cities like New York City, Seattle, Miami and in states like Iowa and Kentucky, estimates its efforts have resulted in the raising of 10 million bees in 44 states.

Honeybees remain “the most economically valuable pollinators of crop monocultures worldwide,” said The Royal Society in a 2006 article.

However, bees have experienced rapid declines nationally and worldwide. For the majority of the past decade, beekeepers, primarily in the United States and Europe, have reported hive losses of 30 percent or higher. In addition, one in four wild bees in the U.S. is now at risk for extinction.

Scientists are still trying to tease out the exact causes, however, they’ve pointed to diseases, parasites, habitat fragmentation, pesticides, colony collapse disorder, climate change and a combination of all these. And the losses are concerning as about a third of our food relies on pollinators (honey bees are one of many species that pollinate).

As the bees suffer, city residents are building sustainable operations that invest in conservation, education and economic development.

“I really think it’s all about the education and the importance of pollinators, how it’s so important to our food systems—especially in Detroit, one of the most insecure food cities,” Jackson said.