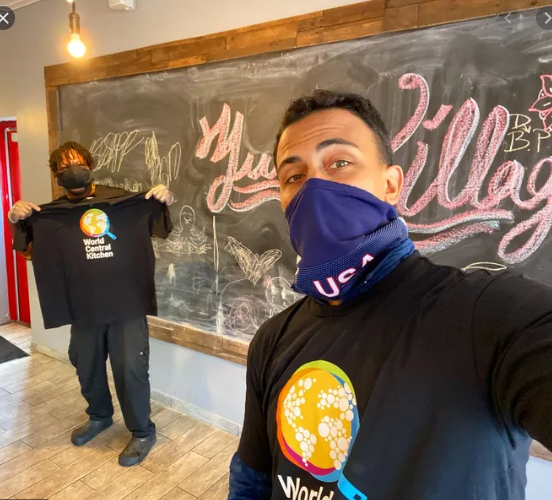 Area chefs are feeding thousands of Detroiters with funding and guidance from an internationally renowned food-relief organization.

Culinary specialists with Lady of the House, YumVillage and Touch of Class Catering are preparing hundreds of meals weekly via a $50,000 commitment to date from World Central Kitchen (WCK), a group founded by celebrity chef José Andrés.

Area families and senior centers have received about 5,000 of the ready-made, nutrition-friendly meals since the project launched three weeks ago. Food is distributed 10 a.m.-1 p.m. Friday — while supplies last each session — in the parking lot of Triumph Church’s East Campus, 2760 East Grand Blvd., Detroit

Still, the Detroit chefs appear to have leeway for a personalized touch: YumVillage’s Godwin Ihentuge, for instance, has prepared dishes with the Afro-Caribbean touch for which his Midtown restaurant and food truck are known.

Offerings from Lady of the House chef Kate Williams have included a turkey dish with garlic rendering, served with fresh asparagus and broccoli mix, while Touch of Class chef Mandell Crawford has provided turkey and veggie tacos.

“It’s been fantastic to get folks food they might need,” Conyers said. “We’re spreading the love to help as many folks in need as possible.”

The initiative is also shoring up business for the three participating restaurateurs, who have reactivated kitchen staff for the cause.

World Central Kitchen was founded by the Spanish-born Andres in 2010 in the wake of the Haiti earthquake. The organization has since spearheaded humanitarian food efforts following disasters globally.

The group’s ChefsForAmerica program was launched in the U.S. during the early stages of the COVID-19 pandemic, and as of Friday had provided more than 6.5 million fresh meals nationwide, according to the WCK website.

WCK has also organized distribution of frozen meals during the pandemic, including about 75,000 so far in metro Detroit.

“When I saw they were doing (ChefsForAmerica), I reached out and was able to get a $10k per week budget to help put some chefs who were already doing great community work back on the go,” said Conyers, who represented Michigan’s 4th District from 2016 to 2018