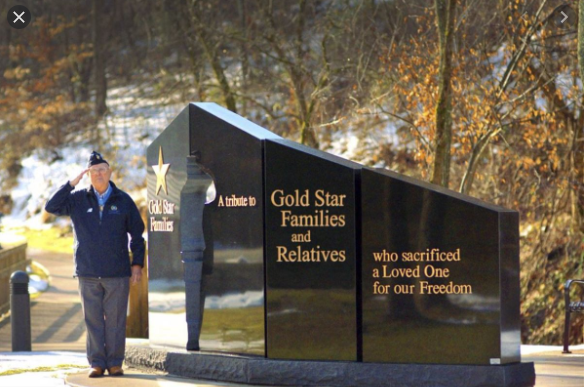 People across the country will soon pay their respects to military personnel who have died while serving in the U.S. armed forces this Memorial Day. Locally — along with help of a Medal of Honor recipient and his foundation — efforts are underway to reflect on Memorial Day year round, by establishing a Gold Star Families Memorial Monument.

A new Gold Star Families Memorial Monument honoring the families of servicemen and women who sacrificed their lives while serving in the military is currently being planned in metro Detroit. The proposed site location is on the grounds of the Clinton Township Civic Center, located at 40700 Romeo Plank Road, south of the Clinton-Macomb Public Library Main Branch.

Nick and Karen Straffon, of Algonac, are the honorary board members for the Gold Star Family Memorial Monument, associated with the Hershel “Woody” Williams Medal of Honor Foundation.

The black granite monument will feature two sides — one side bearing the words: “Gold Star Families Memorial Monument, a Tribute to Gold Star Families and Relatives who sacrificed a Loved One for our Freedom,” and the other side featuring four granite panels with the words “Homeland, Family, Patriot, and Sacrifice” inscribed.

Karen Straffon has participated in “Wreaths Across America” at Resurrection Cemetery in Clinton Township since 2012 and has met many Gold Star families.

“They go through the pain and sacrifice everyday for the rest of their lives,” she said. “This is one way to make sure they are honored and not forgotten.”

The idea for a monument to be built in Clinton Township came in 2017 after Karen Straffon attended the dedication of the foundation’s first and only monument in Michigan, in Bay City.

The goal is to raise $75,000 for the monument. Due to COVID-19, a couple fundraising events and dinners have been canceled.

Karen Straffon said what Gold Star families want the most is for others to ask about their son or daughter.

“Then they know they are not forgotten,” she said.