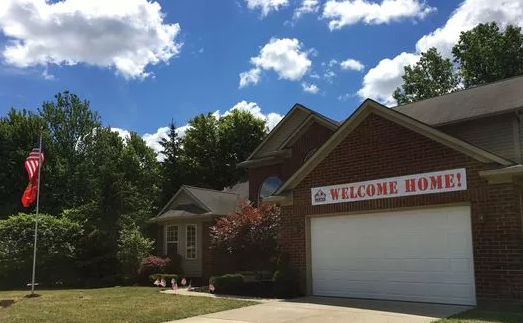 The Purple Heart recipient, who was injured in an IED blast in Afghanistan in 2010, was overwhelmed Tuesday morning as he took a tour of his new, mortgage-free home — a red-brick, four-bedroom in Taylor that was given to him and his wife through a partnership between Building Homes for Heroes and J.P. Morgan Chase & Co.”It’s big. We’re in a little apartment right now. A little step up,” Schroeder said, as he took the first survey of his new home. “A little step up.”The home has been modified to meet the needs of Schroeder, who endured numerous injuries while serving in Afghanistan, including chronic migraine syndrome, post-traumatic stress disorder, a traumatic brain injury, degenerative disc disease, arthritis in his back, shoulder and hip injuries and hearing loss, according to a news release from a publicity firm for the project.Building Homes for Heroes builds and modifies homes for wounded veterans and their families and has given more than 100 homes to families across the country, the release stated. The Schroeder home is the second home given in Michigan, the group’s spokeswoman, Vicky Liu, said.”All we can say is thank you, but it means ten times more to us than anything you can ever imagine,” Briana Schroeder said. “That’s how I feel.”