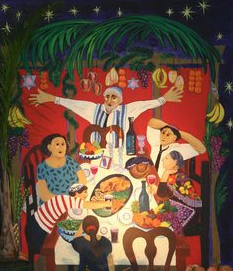 Sukkot is the Jewish harvest festival that reminds followers both of thanksgiving and the time when, centuries ago, ancient Israelites spent years wandering the desert — erecting temporary dwellings along the way.As the lesser-known holiday arrives this week, the Detroit chapter for Repair the World, a group that mobilizes young Jews to volunteer in tackling pressing needs, is hosting two events aimed at connecting it to modern times.On Sunday, volunteers planned a “social” for the community showing off their contemporary take on the sukkah — the provisional huts that marked the Jews’ exodus — while teaching about food security.Then on Friday, members will stage “Turn the Tables,” a dinner and conversation focused on women and sustainability in the Motor City.Just as the festival can foster friendly relations between neighbors and impart lessons about Earth’s offerings, coordinators hope the twin gatherings plant plenty of goodwill — and knowledge — among participants.“We’re doing learning in the context of the Jewish holiday, but we have so much to learn from each other, especially in this day and age when we can feel so divided,” said Sarah Allyn, the chapter’s executive director. “Repair the World is really trying to bring communities together to learn from one another. We hope to do it in a space that is beautiful and communal.”That ethos guides the national group, which was founded in 2009 and boasts chapters in cities such as Philadelphia and New York. Like other communities, Detroit’s division has a cohort of fellows committed to nearly a year of service that includes partnering with other groups to plan events and volunteer opportunities, Allyn said.Buy PhotoStaci Rosen, 22 and Aaron Cahen, 22 with Repair the World Detroit are seen digging holes to assemble a temporary shelter to show off their take on the sukkah — the provisional huts that marked the Jews’ exodus. It’s part of “Sukkah Social,” an event the group holds Sunday coinciding with Sukkot, the Jewish harvest festival observed next week.  One of the ideas was the “Sukkah Social” on Sunday, for which organizers asked attendees to bring a gourd and help decorate a newly assembled hut. Participants also could pitch in to create a large wreath assembled with hand-shaped cutouts; nosh on fresh goods from Eastern Market; and glean factoids about how Sukkot intersects with food availability in the city, said Staci Rosen, an educational justice fellow with Repair the World Detroit involved in the undertaking.“It really ties in a lot with learning about food insecurity and who in our city is going without or not enough access to healthy, fresh quality and low-price food,” Rosen said.ADVERTISINGinRead invented by TeadsThe construction of the sukkah, which typically includes leaves and branches while positioned beside synagogues and homes, also serves to deepen bonds, the Long Island native said. That’s why her group plans to leave theirs out through the week.“Homes are really symbolic of communities and roots and bringing people together,” she said.“Turn the Tables,” which draws guests to Repair the World Detroit at the end of Sukkot, burrows into similar terrain.Join now for as low as99¢/1st monthSubscribe NowThe event dovetails with “Act Now for a Different Kind of Service,” a High Holidays-themed effort connected to the national group’s ongoing campaign to address urgent needs around education, food and other issues. During a Shabbat dinner, attendees have a chance to hear from women involved in urban farming and sustainability efforts, said Noah Betman, an education justice fellow originally from West Bloomfield Township.“We really want to show what is possible in urban agriculture and how that can be done in a city like Detroit. Women haven’t been highlighted as much for the incredible work they’ve done in the community. We want to give them center stage.”