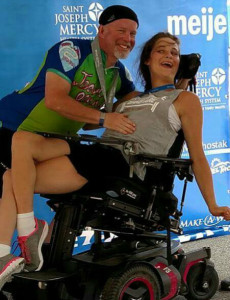 Oxford resident Mark Terrian recently joined approximately 900 cyclists for an exhausting and exhilarating event July 28-31, which raised more than $2 million for the granting of wishes for Michigan children who are battling daunting illnesses.

An avid cyclist for the past 12 years, this was Terrian’s first time participating in the 29th Annual Wish-A-Mile Bicycle Tour.

According to Terrian, he became inspired to check the experience off his bucket list after he began battling an illness of his own last August. He was diagnosed with rectal cancer.

Mark Terrian, of Oxford, with 18-year-old Nella, who served as the team’s “wish hero” and source of inspiration during the event. Nella had her wish to go to Walt Disney World Resort granted by Make-A-Wish Michigan back in January 2008. Photo provided.

“It was a great way to give back to a young child to help them get the wish that they wanted through the Make-A-Wish foundation,” Terrian said.