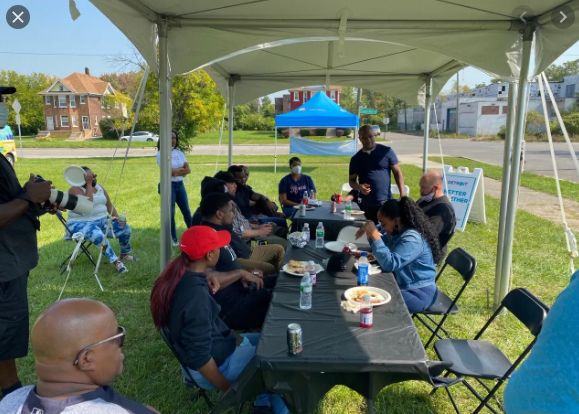 On Wednesday, at the same time a Kentucky attorney general was announcing findings in the Breonna Taylor case, a small group of men and women gathered on Detroit’s east side to eat some barbecue they had cooked outside together.

And as cities across America saw protesters chanting angrily, further igniting the divide between citizens and police, the folks in Detroit, some as young as 20, some approaching 60, finished their ribs and chicken around a table and began to talk.

And as cops in Louisville braced for a night of verbal abuse and potential violence, the people at the Detroit table introduced themselves to one another.

Up to that point, they had merely been part of a shared grilling and eating experience. Now one man revealed he’d been incarcerated for years but “was getting my life back together.” Another said he’d had a tough upbringing and run-ins with the law, but was trying to stay on track “for my kids.”

Eventually, a few of the older attendees stated their names and said they worked “for the city.” When pressed as to what they did for the city, they said they were police officers.