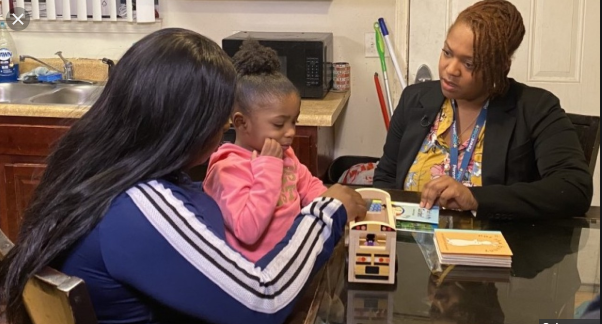 A nonprofit known for its dedication to foster care is branching out with a new program in the metro Detroit area, and it’s all about literacy. The social services program is called Orchards Children’s Services, and the literacy program is called Parent Child+.

Tutors go into homes to teach parents with children 2 and under skills needed to prepare them for school and beyond.

Queen is a 2-year-old bundle of energy. Her mom, Shaquanna Bullock signed her up for a program called Parent Child+ through Orchards Children’s Services in Southfield.

Shaquanna learned about the program on social media. It offers free toys and books to parents with children 16 months to 2 years old. Tutors come into homes to help parents like Shaquanna better prepare their children for school and the progress is visible. Queen can count, knows words and colors.

Orchards is known for its foster care serving more than 8,000 children in 15 counties, but in 2018, Orchards branched off into education. Thanks to a $750,000 grant by NBA team owner and Detroit native Steve Balmer, they brought Parent Child Plus to the Detroit area, but it actually began in New York in 1965.

Tutors come into the home twice a wee for 23 weeks. Shaquanna has already completed year-one with the program and is now on her second year.

“It’s really helped the whole family,” Shaquanna said. “I love the program. If it could go more than two years, I’d keep going.”

Lucretia Massengale is coordinator of the program. The mission is to give families a strong foundation.

“Initially parents assumed that our role was to be the teacher,” Massengale said. “But what we were telling parents is that we’re here to support you, we’re like your coach.”

Initially they targeted 35 families. This year, in 2020, they hope to serve 50 families.

“Many of the homes that we went into, a few of the parents were like, ‘Oh, wow, this was her first book,'” Massengale said. “That type of stuff is remarkable. That’s why we want to help.”