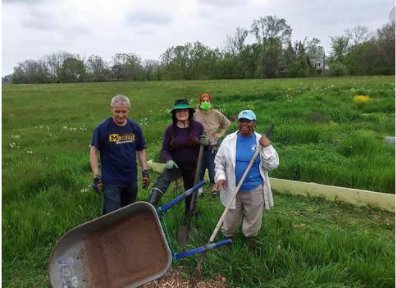 Wisniewski and his organization were chosen as winners of a contest Oswald and ClickonDetroit launched in support of others who are making a difference in Detroit. Friends of Fletcher Field was selected as an organization that truly embodies the unstoppable spirit of Detroiters.

Since 2007, Detroit’s Mt. Olivet neighborhood near Van Dyke and McNichols has enjoyed a relationship with this group of both current and former neighborhood residents. The group was formed after Mike Happy made a visit to the place where he grew up.

Finding his boyhood field of dreams overgrown, littered, and surrounded by vacant lots and abandoned homes, Happy was inspired to start a blog, “Going Home.” It wasn’t long before he’d received hundreds of responses from past residents whose fond childhood memories of the neighborhood weren’t even possible for the kids living there now. The newly connected people from past and present decided to do what they could to give these children some of the carefree fun they had enjoyed.

Over the past 13 years, the Friends of Fletcher Field have faced plenty of ups and downs, not unlike the city itself. Through all the obstacles, the group has continued to gather for an annual spring clean-up — even this year during a pandemic. The group has held picnics, organized softball games, and hosted a popular Trunk-or-Treat event. Resident Edith Floyd faithfully tends a vegetable garden and shares the bounty with her neighbors and local food pantries.