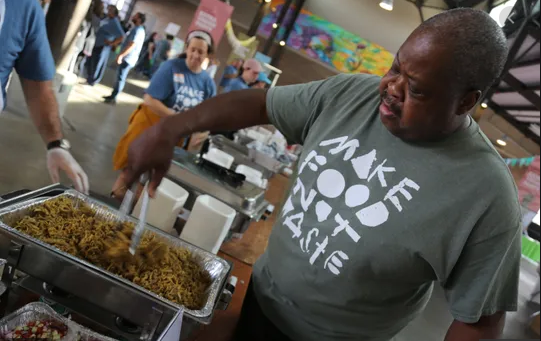 On the day I meet Phil Jones to interview him for this story, he looks like he hasn’t slept in a week or so.

Jones normally towers over others thanks to a formidable 6-foot-2-inch frame, but on this recent Monday, the bleary-eyed chef is so exhausted he shrinks into the couch at the Avalon Cafe & Biscuit Bar in Detroit’s New Center.

It’s been less than 24 hours since the most challenging day of his year, the culmination of nine months of preparation and planning. The previous day, Jones orchestrated a massive operation of volunteers and community members that served 5,000 meals in six hours. For free. From scraps.

He is more than tired. His body — arthritic from head to toe — is on fire.

“Right now, it feels like I have knives in my back,” Jones says wearily. “And this is a good day.”

But at 55 years old, having spent the better part of those years on his feet behind hot stoves, Jones isn’t about to let his physical ailments prevent him from his calling: feeding the community.

Source: Phil Jones is one of Detroit’s most important chefs. Here’s why.