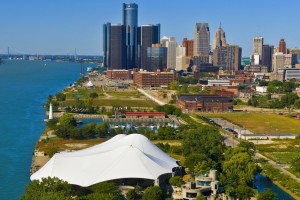 Now, picture a declining Rust Belt city, a place where swaths of once-developed land have returned to wilderness. Crime is rampant, streetlights are dark, and house after house stands abandoned.

These two cities must be worlds apart, right?

Actually, the first city is modern day Detroit. So is the second. But in the midst of a green-fueled transformation, it may not look like this much longer. The Detroit drive — a passion spurring longtime locals and newcomers alike — is in high gear, working to transform a fallen Motor City into an emerald gem.

Here are a few ways to explore the green side of Motown.

“What works in our favor is this city was built for 2 million people,” Detroit Greenways Coalition executive director Todd Scott said. “They built interstates and then 1.3 million people left. Most roads in Detroit are just wonderful for biking right now.”

The coalition is working to create a citywide trail network throughout the 140-square mile metropolis. Later this spring, a path will connect the riverfront with the thriving and historic Eastern Market, a booming Midtown and the city-within-a-city of Hamtramck. The next step is a 26-mile greenway around the city, with dreams of an edible greenway of gooseberries, hazelnuts and pawpaw trees to come.

Go on a bike tour of Eastern Market or Detroit’s urban gardens with Wheelhouse (www.wheelhousedetroit.com), or rent a set of wheels from its riverfront or new Hamtramck location, opening in May, for your own spin through The D.

Take over the streets with thousands of cyclists at the annual Tour de Troit (www.tour-de-troit.org) ride Sept. 17, or tag along on Monday night Slow Roll cruises (www.slowroll.bike) for bikers of all skills and ages.

Get your hands dirty

With gardens springing up across the city — many fed by compost from Detroit Dirt, which turns restaurant scraps and zoo manure into fuel for Detroit’s renewal — you won’t have to look far for a place to dig into the 313.

The nonprofit group Greening of Detroit offers several hands-on opportunities for volunteers to plant, weed, water or harvest at places such as Lafayette Greens, an organic garden in the shadow of Detroit’s skyline, and Romanowski Park. Check Greening’s Facebook page for details.

Keep Growing Detroit promotes the growth of fruits and vegetables within the city. It operates Plum Street Market Garden, a nearly 2-acre downtown site owned by MGM Grand Casino. Pitch in by helping staff produce transplants used in gardens across the city. detroitagriculture.net

Not long ago, wild dogs could be found roaming among waist-high thistles in a devastated area on the east side.

After lengthy negotiations with the city, wealthy entrepreneur John Hantz bought 140 acres — now dubbed Hantz Woodlands — and enlisted agricultural educator Mike Score and thousands of volunteers to attack the blight. The result is an urban forest underway with rows of oak, birch, poplar and maple trees replacing the once-desolate landscape.

“Imagine in one year, in 1 square mile, half the blight goes away,” said Score, who noted that workers encountered everything from a human skull to abandoned boats among the un-managed wilderness. “It’s a big win for the city. Now you’ve got a place to show people what’s possible.”

The project isn’t without controversy, as detailed in the new film “Land Grab,” which made its world premiere earlier this month at the Detroit Institute of Arts.

Visitors can walk, bike or drive through this area northeast of the Indian Village neighborhood to witness the greening in action or join the efforts May 7 during Planting Day, when hundreds of volunteers will plant 3,000 trees.www.hantzfarmsdetroit.com

After exploring Hantz Woodlands, Rose’s Fine Food (www.rosesfinefood.com) makes a fine brunch stop. Made-from-scratch dishes with local ingredients attract an out-the-door line to the small diner. It’s worth the wait for menu items like the Babe Squad, two sunny-side-up eggs with sauteed garlic kale, beans of the day, and house toast dressed with goat cheese and local honey. Rose’s pays employees a living wage, but if you do opt to tip, know that a portion of that money is given to a local charity.

The frequently changing menu at Chartreuse Kitchen & Cocktails (www.chartreusekc.com) in Midtown features artful dishes starring ingredients from local farms. A vertical garden and vivid green walls add to the green theme that permeates not just the restaurant but increasingly, the city as a whole.