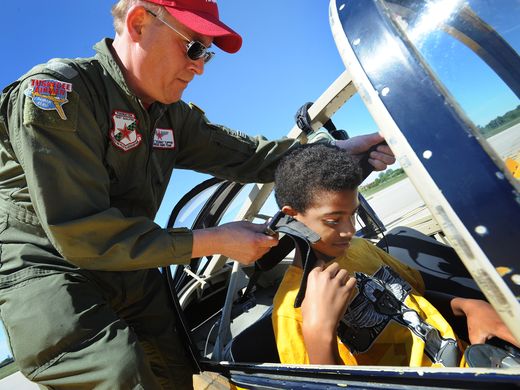 That meant a new experience for dozens of Metro Detroit youths on Sunday, when the Experimental Aircraft Association’s Young Eagles program came to Detroit City Airport.

The Young Eagles program has been going nationally since 1992, and is closing in on its 2 millionth ride. Its purpose, outside of fun, is to entice children to consider a career in aviation, said Larry D. Sargent, vice president of the National Museum of the Tuskegee Airmen, who volunteered Sunday.

The pilots are volunteers who use their own planes. Helping children see Detroit from a new perspective keeps them afloat.

“Is that Belle Isle?” one child asked as the four-seater aircraft approached the island. “It is,” the pilot said.