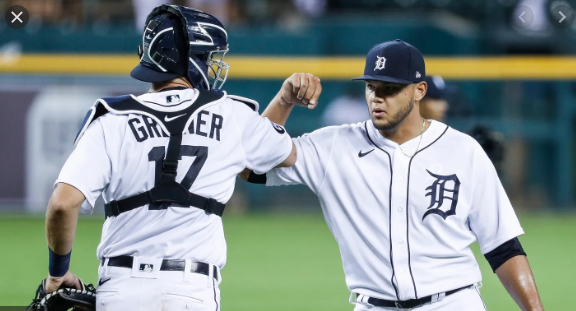 Detroit Tigers relievers used to hang out in a bunker below the bullpen, trading secrets on the opposing team. Celebratory beers for a walk-off win were common and helped boost team morale. Conversations were had in person. Nobody held back from getting up close and personal to pump up a teammate.

Because of the COVID-19 pandemic, they recline in the left-field stands, sitting socially distant under a pavilion roof at a fanless stadium. Players cannot arrive more than five hours before the game starts and aren’t permitted to stay later than 90 minutes afterward. They say congratulations over text messages and don’t spend time together outside of Comerica Park.

“There’s no more loitering or hanging around,” right-handed setup man Buck Farmer said. “It’s ‘get in, get out.’ “

Kind of like the Tigers’ bullpen on the field.

The combination of Gregory Soto in the seventh inning, Farmer in the eighth and closer Joe Jimenez in the ninth has unlocked something unexpected this season. While Detroit’s hitters are striking out at a heavy pace — their 90 whiffs were second in MLB entering Saturday — and the starting rotation is battling injuries, bullpen success has carried the Tigers to a 5-3 start to the 60-game season.

“This can be big,” manager Ron Gardenhire said. “We have to, you know, not kill them, but we’ve got some people that we can go to we trust.”