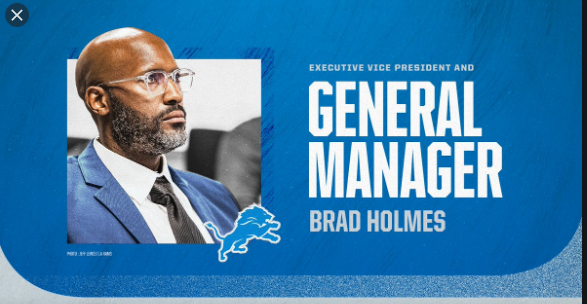 The Lions have made it official, announcing they’ve hired Rams director of college scouting Brad Holmes to be their General Manager on Thursday afternoon.

“On behalf of the entire Lions organization, I am thrilled to welcome Brad Holmes to Detroit,” Lions owner Sheila Ford Hamp said in a statement. “Several weeks ago when we embarked on this process, it was critical that we find the right person to fit our vision for this team. It was evident early on that Brad is a proven leader who is ready for this opportunity. We are thrilled to introduce him to our fans as a member of our football family.”

Holmes had been with the Rams organization since 2003, starting out as a P.R. intern before beginning his career as a scout. He was promoted to director of college scouting in 2013 under General Manager Les Snead.

“Throughout our search for a new general manager, Brad was someone who stood out immediately,” Lions president Ron Wood said in a statement. “His abilities as a critical thinker, along with his extensive experience implementing technology and analytics into his approach to scouting, were among the many decisive qualities Brad displayed in our time getting to know him during the interview process. We look forward to him helping lead our organization as we take the next steps as a team.”