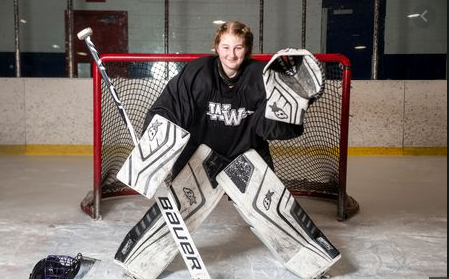 As the Woodhaven High School varsity boys hockey team meandered around the ice at the Brownstown Sports Center before the start of practice, it looked like any other group of hockey players.

With pads, helmets and caged facemasks, it is hard to distinguish who is who unless you know a player’s specific number or tendencies. Sometimes, players stand out because of long locks of flowing hair that spill out from the bottom of their helmets, a somewhat popular hairstyle among high school and college hockey players.

However, one of Woodhaven’s goalies stands out for the pigtails that drop from beneath the goalie mask.

No, it is not a new hairstyle one of the guys is trying out. Instead, it is freshman Kenna Borso, Woodhaven’s first girl to play for the Warriors’ varsity hockey program.

At 5-foot-6, 155 pounds, Kenna is not the most imposing figure. Yet, with her prominent padding and equipment, the 14-year-old manages to blend in with the group of hockey players rather well. Skating by teammates and giving them a friendly swat with the blade of her goalie stick or a playful shoulder check, Kenna is one of the guys despite being the only girl.

“I’ve gotten really close with all of them,” Kenna said of her teammates. “They’re super nice to me now. I talk to every one of them.”

A female goalie on a varsity high school boys hockey team is a rare occurrence, even for a hockey hotbed area like Metro Detroit. But a female freshman getting the majority of starts for her team? That is nearly unheard of.

For Woodhaven, it’s just another day at the rink.

“We’re more comfortable having her in net than the other goalies,” Woodhaven senior center Jacob Kornoelje said. “Gender or anything like that wasn’t a big issue for it. It comes, flat out, down to who can play and who can’t.”