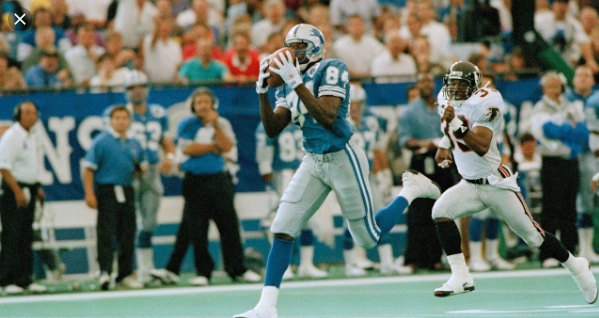 Herman Moore is doing in life after football – “civilian life,” if you will – what he did for 11 seasons as a record-setting wide receiver with the Detroit Lions.

Game plans have been replaced by business plans, but within the framework of team concepts Moore has prepared to take opportunities in his own hands and run with them.

Moore is CEO of Team 84, the Metro Detroit-based parent company of a marketing and advertising enterprise with subsidiaries that Moore founded in 2013. In name and method of operation, Team 84 reflects Moore’s football background.

“It has the word ‘Team’ in it for a reason,” Moore said. “I came from a sport where most great things that were done have been from the assistance and collaboration of others.”

There is understandably a heavy football theme on the company website. For example, the question “How does a brand get where it’s going?” is answered by “Putting every cleat in the proper position.”

As a player for the Lions, Moore took a lot of right steps and did a lot of great things in a career that began inauspiciously in 1991.

As a rookie, Moore played in 13 games with one start and had only 11 catches in the regular season. That sparked questions about whether the Lions had made a mistake in drafting Moore 10th overall out of Virginia.

That was answered in the playoffs.

The Lions won the old NFC Central with a 12-4 won-loss record in the regular season and beat the Cowboys, 38-6, in the divisional playoff.

An injury opened the door for Moore to start the playoff game. He gave Lions fans – and future opponents – a glimpse of what was to come — with six catches for 87 yards and a touchdown.

“I just remember how I was the most relaxed,” Moore says now. “I felt like I’d arrived. There was no nervousness.”

Moore was a starter in 1992 and remained one until a knee injury sustained on opening day in 1999 changed his career, and not for the better. He went from starting star to role player, one that he made clear at the time he did not accept uncomplainingly.

Before that, Moore made his mark as one of the greatest offensive players in franchise history. He was a key member of Lions teams that made the playoffs six times in nine seasons (1991-99), won division titles in 1991and ’93 and had double-digit wins three times.

“For at least a period, there was a window where we had firepower,” he said.

Moore made the Pro Bowl four straight seasons, from 1994-97, and was first-team All Pro three times.

Moore, 50, was forward-looking during his career. He had planted roots in Metro Detroit, where he has remained with his wife, Angela and their sons Aaron and Ashton. He had business interests, but not to the extent of Team 84.

“I had already started to think about business and some things I wanted to do next,” he said. “The tough thing was, I lacked the skill set to understand things. I’d known football for so long. I was trying to learn something and do it at the same time, which is not a good mix.

“In retrospect now, I’d pause and take some time to catch my breath. I’d educate myself to what my next step would be.”

Source: Where are they now: Herman Moore