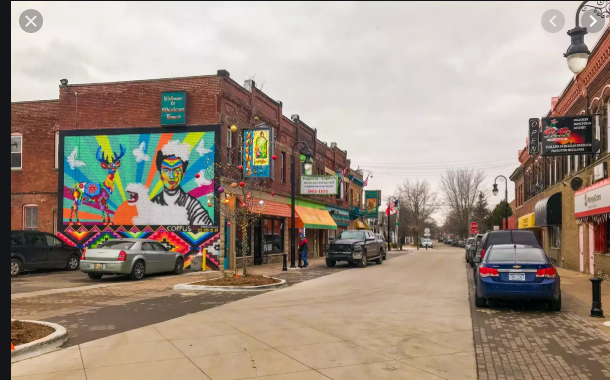 Between the I-75 Service Drive and 24th Street, there’s now an unmarked two-lane road of cement blocks, brick pavers on either side for parked cars, and street-level sidewalks made of another color of pavers. Small decorative designs repeat throughout the sidewalk. There’s also new landscaping and bollards to create visual interest and impediments for cars.

A spokesperson with the city’s Department of Public Works told Curbed Detroit that the project is “98 percent complete” aside from some festive lights that will be installed in March.

Shared streets are roads where pedestrians, cyclists, and vehicles all occupy the same space. Bagley now has some obvious crosswalks and parking spots, but people are more or less free to traverse the road as they choose.

It’s a concept popularized in Europe, and preliminary studies have shown it improves safety. In a Vox article about the new traffic design, researchers found that…

After installing shared spaces, Ipswich’s accident rates with injuries fell from 23 over three years to just one per year. Pedestrian injuries at London’s Kensington High Street fell by nearly 60 percent. And in Drachten in the Netherlands, accidents at one intersection fell from 36 in four years to two in two years.

In Detroit, the street can also be easily blocked off from traffic to create a car-free area ideal for festivals.

This is the first completed streetscaping project of several that began last year. In general, they’ve been disruptive to local businesses, forcing some to close or temporarily suspend operations. But owners have also expressed optimism about the completed designs, which are expected to improve walkability, safety, and transit access.

Streetscaping projects on Grand River and Livernois avenues are much longer than Bagley’s, but are still expected to be finished in 2020.