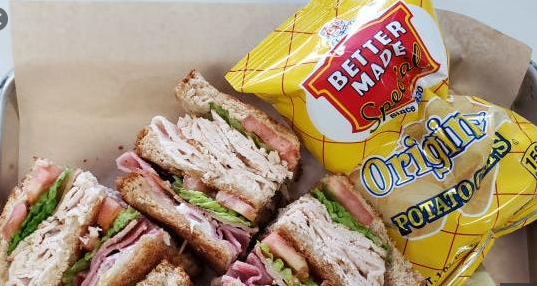 Be it to help employees, feed the community or just plain boredom, several Metro Detroit restaurants have recently made the decision to restocked their pantry and reopened for carryout and, in some cases, delivery service.

In the past few weeks, a variety of eateries across town have re-emerged after closing for business in mid-March when Gov. Gretchen Whitmer’s executive order mandated bars close and restaurants close their dining rooms to help stop the spread of COVID-19.

“My employees were itching to get back to work,” said Dave Zainea, co-owner of the Majestic Theatre in Detroit. On Monday he put eight employees back on the payroll to reopen Stg. Pepperoni’s Pizzeria and Deli, located inside the Garden Bowl, which is part of the Majestic complex on Woodward.

“We want to do some work and serve the community. We’re selling pizzas but we’re also donating pizzas, too. We wanted to get back at it, get some inertia going,” said Zainea, adding that he’s helping deliver pizza himself.

Of all his businesses — a variety of live music venues and two bowling alleys, all with bars — Stg. Pepperoni is the only one that can be open with the current order in place.

“I take each day as it comes,” he said, explaining that the closure of clubs puts not just performers, but sound engineers, loaders and bartenders out of work. “The uncertainty is killing me … we wanted to get these shows going back up but I don’t want anybody to get sick either. I don’t want my employees nor my customers to get sick. It’s dicey.”

Known for cheesy, hand-tossed round pizzas, Stg. Pepperoni also makes sandwiches, stromboli and chicken and offers a family meal with two pizzas with two toppings, a choice of side and wings or chicken strips for $40. The Midtown spot offers delivery within two miles and all orders are taken via credit card. You can order through the GrubHub app or call (313) 833-7272.

Also in Midtown, vegan coney Chili Mustard Onion is reopening for curbside carryout on Monday. They’ll be serving noon-4 p.m. through Saturday. Call them at (313) 462-4949.

Shangri-La Chinese restaurant closed its West Bloomfield Township and Midtown Detroit locations in early April, but the West Bloomfield location reopened Friday and the Cass location is expected to turn the lights back on next week. Visit midtownshangri-la.com.

Also in Detroit, newer Greektown restaurant Delmar is planning to open for carryout and delivery via Uber Eats, DoorDash and GrubHub on Monday. The hours will be 4-8 p.m. to start, and they’re also available for catering orders. Delmar specializes in American food like pizza, burgers, tacos, sandwiches and salads. Visit delmardetroit.com to get started.

Owners of Hazel, Ravines & Downtown in Birmingham returned May 1 with a menu of lobster rolls that you could order fresh or buy as a kit to make later. They were a massive hit; the restaurant moved around 2,000 lobster rolls in their first weekend. Co-owners Beth Hussey said Emmele Herrold said they were “on cloud nine” and that the response exceeded expectations.

They’ve added additional phone lines and may introduce more specials to the menu as the days go on. For now they’re open for curbside carryout and local delivery Tues.-Sun. by calling (248) 671-1714.

A few local eateries serving Mexican cuisine opened just before this month’s Cinco de Mayo celebration. This includes Mi Pueblo and Eve’s Tamales in Southwest Detroit, as well as the four suburban El Charro locations. The line for their drive-thru location in St. Clair Shores stretched at least a quarter mile down Harper on May 5, but the response was overwhelming as soon as all four locations opened on April 29.

“There are no words to describe what happened to our restaurants yesterday,” read a statement on the El Charro Facebook page on April 30. “We are so overwhelmed and grateful for the enthusiasm surrounding our reopening! We are honored to be back open and of service to our communities once again.”

Known for beautiful sushi rolls and creative concoctions like the avocado spiral and sashimi salsa chips, Xushi Ko has kicked the lights back on as of May 4 and is serving carryout as well as delivery for the Dearborn and Dearborn Heights areas. Call (313) 982-1730 to place an order 4-10 pm. daily.

Dearborn’s Bangkok 96 has reopened for carryout service after being closed for several weeks. (Photo: Courtesy of Bangkok 96)

Also in Dearborn, chef Genevieve Vang of Bangkok 96 restaurant has been keeping busy with other chefs in the Too Many Chefs in the Kitchen for Good group. They’ve been making meals at the Horatio Williams Foundation kitchen for Detroiters in need during the pandemic. She reopened her Telegraph restaurant May 4 to get her stir-fried Thai specialties into the hands of customers. Call (313) 730-8161 to order.

Another Michigan food business that was taking this time to help others is Blake’s Farm. The folks there are giving free lunches to school-aged children, and Blake’s Hard Cider started making hand sanitizer, like many alcohol producers around the state.

The restaurant at Blake’s in Armada had been closed, however, and reopened on May 1 with beer-friendly appetizers, sandwiches, salads and even a Friday-only prime rib dinner. Call (586) 784-9463 or visit blakefarms.com.

More: Mudgie’s is back with carryout sandwiches and groceries

Source: These Metro Detroit restaurants have recently reopened for carryout