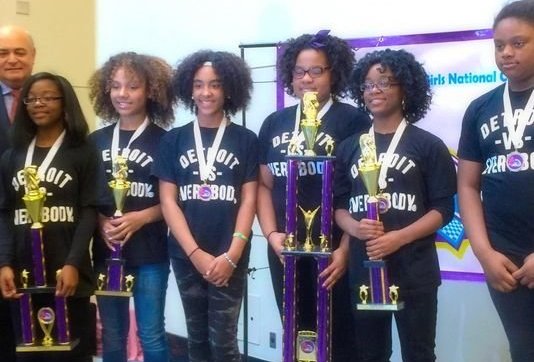 A group of eighth-grade girls hailing from Detroit, Michigan, won a battle of the minds on Sunday when they took home the gold at a national chess tournament.

Led by 13-year-old Jada Hamilton, the five-member University Prep Science and Math team earned first place in the “Under 14” category at the 13th annual KCF All-Girls National Championships in Chicago, according to The Detroit News.

“I was pretty amazed,” Hamilton told the outlet the day after her team’s victory. “It’s hard to describe how I felt that day because I was really happy.”

The girls prepared for the event, billed as the biggest and most prestigious all-girls, under 18 tournament in the country, with a chess master. Nearly 450 players from 27 states participated in the tournament. Hamilton’s team, who is also active in the Detroit City Chess Club, competed in this tournament before but this was their biggest win, their coach said.

Head coach Kevin Fite told The Detroit News that though the team has won other national tournaments, University Prep Science and Math was “the underdog” of the competition.

“We always tell them, every place they go, they represent Detroit,” assistant coach Kwabena Shabu said. “It’s a wonderful showing.”

Hats off to these grandmasters in the making.