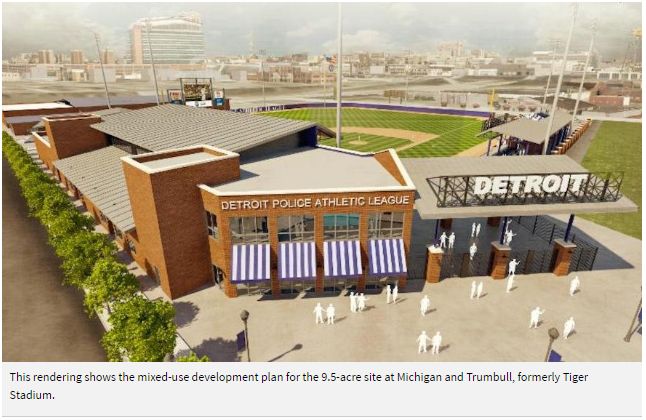 Supporters of the Detroit Police Athletic League (PAL) have a chance to make their mark at the site of historic Tiger Stadium.

Fans can purchase and engrave personal messages on bricks to be installed at the entrance of the new stadium entrance. It’s a part of the league’s Kids at the Corner campaign to redevelop the baseball field at the corner of Michigan and Trumbull avenues. Proceeds from the brick campaign will go to Detroit PAL and Kids at the Corner.

“We are committed to honoring the history of the stadium while looking forward toward the future of Detroit and the youth of this city,” Detroit PAL CEO Tim Richey said in a statement. “The redevelopment of this site is the perfect marriage of the old and the new. We’re embracing the history and heroes who once played here and also setting a stage for a new generation of athletes.”

The Kids at the Corner campaign launched in 2015 after the Detroit Economic Development Corp. gave PAL the green light to build its headquarters and sports complex at the The Corner. Once completed, Detroit youth will have a chance to play ball in a state-of-the-art, 2,500-seat baseball stadium called Willie Horton Field of Dreams, presented by Grand Rapids-based Meijer Inc. The Detroit Tigers played at the Corktown field from 1912-99 before moving downtown to Comerica Park in 2000.