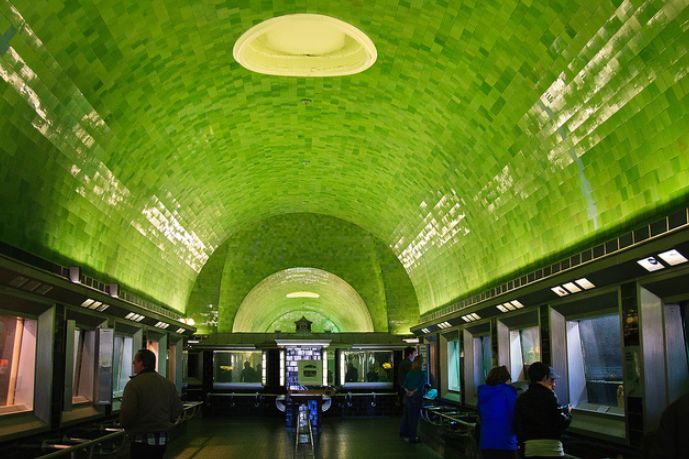 Well, that’s a stretch. The Belle Isle Aquarium is the new home of two harmless prehistoric piscines, better known as sturgeon (pronounced STIR-gin). If you see them you can truly say, “You haven’t changed in ages!”

They could grow to 7 feet long. But right now? They’re just over a foot. They’re under wraps for an unveiling at the aquarium’s fund-raiser this week. Still, the Free Press got a sneak peek, and we can’t keep a secret.

That’s because, while these slim brown creatures are no danger to Detroit, in a finny old-fashioned way they’re a big deal. The once-endangered Great Lakes sturgeon is making a comeback, just like Detroit, and just like the city’s historic aquarium.

From just a few years ago, when Detroit was bankrupt, and when the 113-year-old aquarium had a leaky roof, no money and not a single fish, “we’ve really come such a long way,” curator Paul Shuert said, smiling Friday as visitors filed past watery exhibits filled with fish of all sizes and colors. Through relentless fund-raising, generous donors and the amazing dedication of volunteers scrubbing and painting and writing grant requests, the building’s turn-of the-last-century vibe is back — and so are 45 tanks of living critters.

“We have 10 tanks to go. My goal is to have 100% of our tanks filled a year from now,” Shuert said. That prospect means more eye candy for visitors, and more teachable moments about conservation and threatened species. The fund-raiser, 6-10 p.m. Thursday, also is set to give guests a rare look at a basement nook recreated as the speakeasy that once thrived there during Detroit’s Prohibition Days.