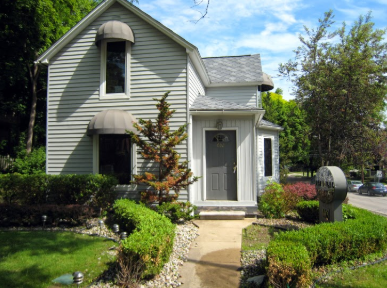 This house on the northwest corner of West University Drive and Wilcox Street was built in the summer of 1897 as the family residence of Rochester cigar maker Frank Butts.  Butts was born in Northampton County, Pennsylvania in 1870, and migrated to Michigan to settle in the Rochester area along with a number of other families from his native county.  In 1891, he married Florence Belle Davis, and the couple made their home in Rochester. In May 1897, the local newspaper reported that Butts was preparing to build a new house on his lot on West Fifth Street (now West University Drive). A month later the Rochester Era told its readers that the frame of the Butts house was up, and in August, it reported that Frank and Florence Butts were moving into their new home.

Frank Butts learned the cigar trade from his uncle, Simon Grube, who built a cigar store on Main Street in Rochester in 1891.  When Grube was ready to retire, he sold his business to his nephew, who ran it in the same location for another three decades.