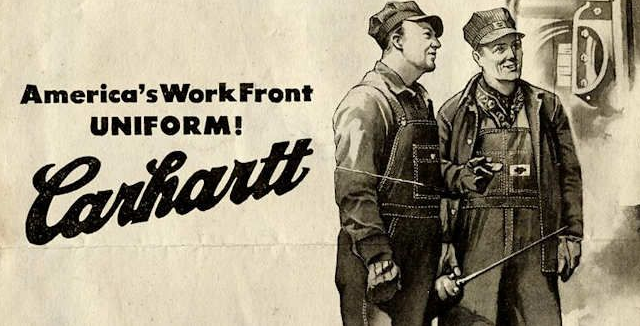 Carhartt is one of Detroit’s most successful brands, as synonymous with work attire as Ford is with cars.  Hamilton Carhartt, a salesman operating with a horse and wagon, founded the Carhartt company in Detroit In 1889. He sought to fill a need for quality overalls. He was originally from New York state, but moved to Grand Rapids, Mich. In 1882, he and his father-in-law, Stephen Alling Welling, started a furnishing wholesaler.

In 1884, the family moved to Detroit, and five years later, the Hamilton Carhartt & Co. was making only workers clothing.  In the early 1890s, the company built this factory at what was then 479 Michigan Ave., on the southwest corner of 10th Street.  By 1905, the company had grown exponentially, expanding not only its factory in Corktown, but also growing its operations to include cotton mills in South Carolina and another in Georgia. The firm also added factories in Atlanta, Dallas and San Francisco, as well as plants in Canada and England.

Like many businesses around the country that relied on working-class customers, Carhartt was pounded by the Depression. It closed most of its facilities and left this massive plant for a smaller building.  By 1932, the company had moved out of its Michigan Avenue location to a much smaller facility at 1743 Labrosse.  Three years later, it moved to 3000 E. Jefferson Ave., clear across town. The firm’s factory in Corktown stood empty in the 1930s and was demolished sometime in the 1940s.

Today, Carhartt is a worldwide brand with some 800 products and headquartered in Dearborn, just outside Detroit.