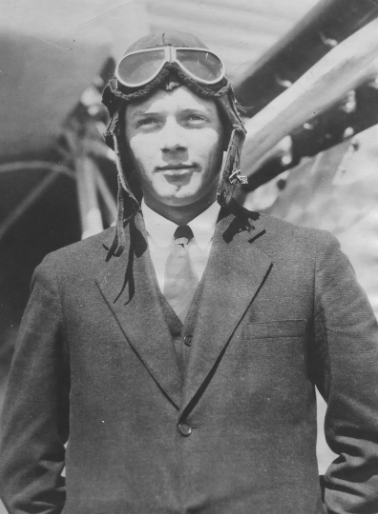 On May 21, 1927, Charles A. Lindbergh Jr. became the most celebrated man in the world. His historic New York-to-Paris solo flight in a single-engine airplane catapulted him to worldwide fame. Detroiters were eager to bask in the glow, in no small part because Lindbergh was born in Detroit.
Charles Lindbergh’s mother, Evangeline Land, graduated from Detroit Central High School and earned a chemistry degree from the University of Michigan. She was teaching science in Little Falls, Minnesota, when she met and married Swedish immigrant Charles August Lindbergh in 1901.
Charles August Lindbergh was a widower, 17 years older than Evangeline. He immigrated as a boy to the U.S. in 1860. A University of Michigan Law School graduate, he became a lawyer and was elected five times to Congress from Minnesota. Charles and Evangeline separated in 1918; he died in 1924.
Charles A. Lindbergh Jr. was born on Feb. 4, 1902, in Detroit, in his maternal grandparents’ home. His mother came home to Detroit so that her uncle, Dr. Edwin Lodge, could deliver her son.
Throughout his boyhood, during long visits to Detroit from his home in Minnesota, Lindbergh spent hundreds of hours in the basement laboratory of his grandfather’s home, learning how to conduct scientific experiments.
In 1922, 20-year-old Charles Lindbergh leaves the University of Wisconsin, takes flying lessons in Nebraska, and makes his first solo flight. This photo shows his plane, a Curtiss “Jenny,” flying over the Hotel Fort Shelby on Lafayette in 1922.
In 1922, with son Charles touring the country as an air circus acrobat, Evangeline Land Lindbergh returned to the city and taught chemistry at Cass Tech for the next two decades.