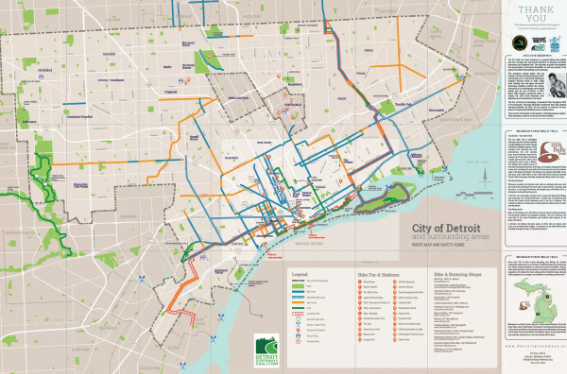 Bike advocacy organization the Detroit Greenways Coalition just released a guide to biking in the city. And it may have the only current and comprehensive map of all the trails and bike lanes in Detroit.

The number of bike lanes has grown exponentially in recent years, increasing from 13 miles in 2007 to around 240 miles today. The city now has everything from standard and protected lanes to greenways, and keeping a map up to date is a challenge.

The Greenways Coalition’s recently released map identifies the various kinds of lanes and trails, including those that connect to the Joe Louis Greenway, an under-development 31-mile non-motorized loop, and the Iron Belle Trail, which will stretch from Belle Isle to the Wisconsin border in the Upper Peninsula.

The guide also includes locations of “fix-it” stations, many of which are at bike stops, and information about the aforementioned trails. There’s also lots of tips about biking in Detroit on the reverse side, such as how motorists should behalf, how to bike safely, and even rules for riding electric scooters.

Source: Check out this handy map to bike lanes and trails in Detroit – Curbed Detroit