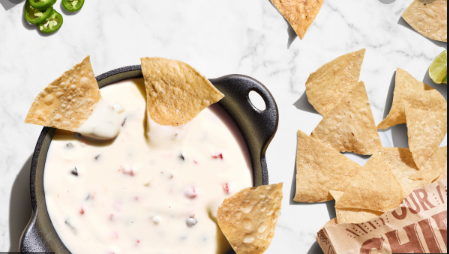 Watching Chipotle test queso is like watching a YouTube video of a cat trying to ride a tricycle. You really want it to succeed because, well, wouldn’t that be wonderful? But you know deep down that the chances of victory might not be that great. We’re sorry to sound skeptical—no one wants the same place we can get a solid burrito bowl to also have a fire cheese dip we can put on everything more than us—but we’ve been down this road before.

Back in 2017, Chipotle listened to the desperate pleas of its customers and began to test queso after finally figuring out a recipe that used all natural ingredients. It apparently performed well in a few markets, so the chain rolled out the hot cheese nationwide. Alas, the reviews were…not great. Chipotle even tried tweaking the recipe, but the new and “improved” version was met with an outcry on social media. One Twitter user even posted a video captioned “The best way to eat chipotle queso” that showed someone throwing the whole cup of it in the trash.

Here we are in 2019, and Chipotle is at it again. Are execs at the chain just gluttons for social media punishment or are they going to make our dreams come true? In an email from the fast casual Mexican food purveyors, it was announced they would test this new creation, a Queso Blanco, in 52 restaurants in Dallas, Detroit, and San Diego for a limited time. This period is called Chipotle’s “stage-gate process,” which “allows the company to test, learn, listen to customer feedback and iterate extensively before deciding on a national launch.”