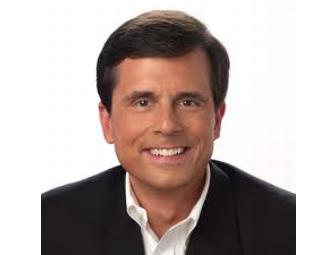 “It is a privilege to be a part of Local 4 and have the career in meteorology and broadcasting that I have. It has been a long and exciting journey but I know in my heart it’s time to pull back on my TV duties so I can switch gears and answer my calling to the ministry,” Gaidica said in a statement issued by Local 4.
He plans to become the pastor of world outreach for Oak Pointe Church in Novi.

“With Chuck stepping down, we had huge shoes to fill to lead our meteorology team,” said Local 4 Vice-President and General Manager Marla Drutz. “We are thrilled to have Ben Bailey join Local 4.”
Gaidica, a Chicago-born three-time Emmy winner hired by Local 4 in 1987, will continue to contribute to “special reports” and “big event coverage.”

“Of all the names associated with Detroit television, Chuck Gaidica is one of the most respected and beloved,” said Drutz. “When Chuck came to me some time ago with a desire to change his position at the station, I was naturally very sad. I’ve known him since 1983 so I know that when he makes a decision of this magnitude that he has come to it after serious thought.”